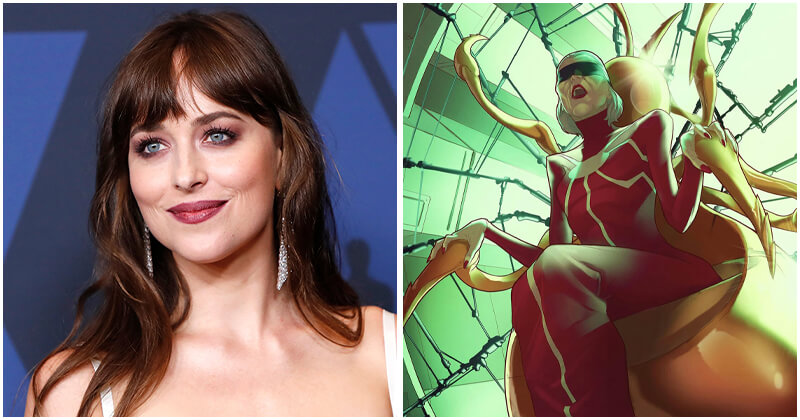 According to the Hollywood Reporter, Dakota Johnson is currently in talks to play Madame Web in the same-name film by Sony Pictures dedicated to this Spider-Man comic book character.

The movie starring Johnson as the protagonist will be directed by S.J. Clarkson, a famous British television director who already worked with Marvel in the 2017 miniseries The Defenders. In addition, Madame Web‘s screenplay will be written by the writing team behind Morbius – which includes Jared Leto, Matt Sazama and Burk Sharpless. Introduced in 1980 in The Amazing Spider-Man No. 210, Madame Web is a clairvoyant mutant who can predict the future of superheroes with superpowers related to Spiders, such as Spider-Man and all versions of Spider-Woman. This character has been alive for hundreds of years and has always been represented as a strange paralyzed old woman who used a complex system of machines that can make up cobwebs.

Madame Web is the first major film of the actress, who was made famous by the Fifty Shades saga. Recently Johnson has just participated in the Sundance Film Festival with two new works Am I Ok? and Cha Cha Real Smooth, in both of which she plays the role of a cast member and one of the producers. This is just one of many Sony-owned Marvel character films that have been developed recently. The first one Sony released was Venom (2018), followed by Venom: Let There Be Carnage (2020) and Morbius (2022). Kraven the Hunter with Aaron Taylor-Johnson is also among the ones that are waiting to be moved on to the next phase.