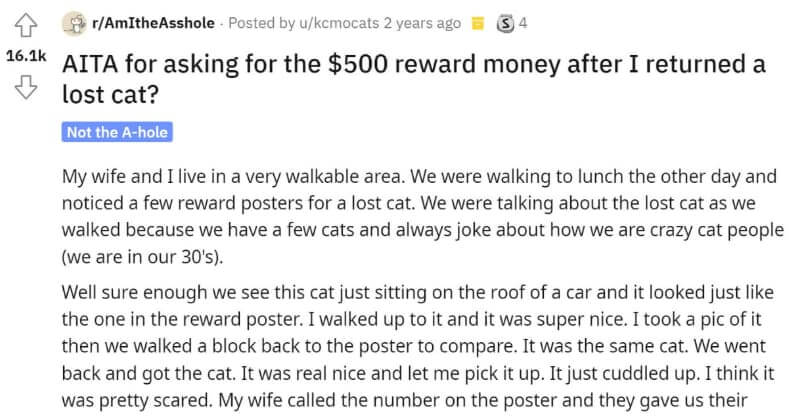 If for any reason, your pets go missing, please be grateful to the person who helps return them back. It shows that you appreciate their help and that the pets are important to you. But don’t ever take it for granted or disrespect their efforts.

Reddit user @Kcmocats has recently shared how his attempts and kindness were ignored after he helped a family find their missing cat.

Kcmocats and his wife were walking to lunch when they came across some reward posters the family had made to search for their cat. They felt bad for the family but continued walking and joking about how crazy cat people they were.

It wasn’t long before they saw the cat on the top of a car parked along the way they were walking. The couple was happy for them, for the cat and its family. When they appeared at their door with the cat in their hands, the family couldn’t be happier.

But the feelings vanished, completely, when the family realized the kind strangers actually needed the promised reward money. Read the full post that Kcmocats shared on r/AITA here.

The post has grained more than 15.7K upvotes and thousands of comments. Kcmocats received three Silver Awards for his work before being officially declared as ‘not the assh*le’. Netizens agreed that he was right to ask for the reward.

The family, however, was wrong for giving a promise that they were not going to keep. The way they changed their attitude toward the man showed that they didn’t respect him at all.

FBI has joined the discussion and shown a frank opinion. There has been a debate about whether it is obligatory to offer a reward to people who find your pets. Well, honestly, no! But in many cases, it can help things move faster.

According to the FBI, rewards can encourage more people to search for a pet, and they do that more intensively. However, owners are advised not to state the exact amount of money they are going to offer. In addition, a high reward is not recommended because it can cause pet-napping (kidnapping pets).

In case someone finds your pet but refuses to give it back before getting the money, it is a case of extortion, and you must call the police.

Here are how Redditors react to the story.

What do you think about it? Please let us know in the comment!

Homeless Man Always Feed Stray Cats Before Himself Every Day

20 Cats Who Deserve A Medal For Their Unique Appearance

Rare Dog Goes Viral After Being Mistaken For A Statue