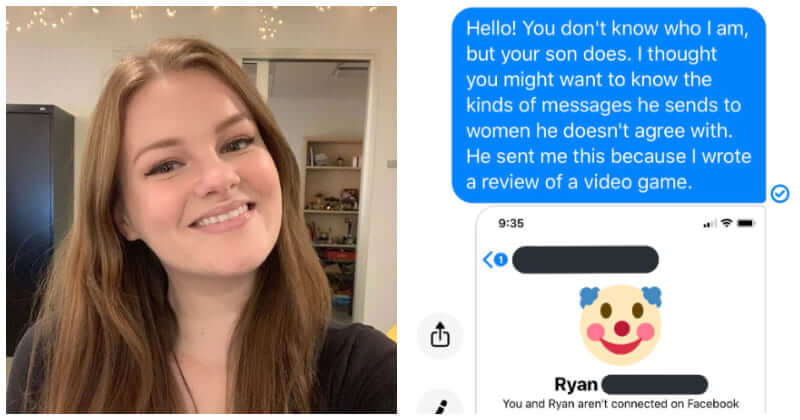 Sexual harassment is unwelcome sexual behavior that’s offensive, humiliating, or intimidating. Anybody can experience it, regardless of their gender. At work, sexual harassment may amount to a form of discrimination. And being harassed is an uncomfortable feeling that no one wants to encounter. Women are far more likely than males to be victims of sexual harassment because they lack power, are in more vulnerable and insecure situations.

Considering the case of this woman. Working in the video game industry, Kallie Plagge is used to being harassed by males. One recent encounter, though, was so excessive that the GameSpot.com writer went on the hunt for allies. Luckily, she found one that was the harasser’s mother. Kallie texted the harasser’s mom screenshots of his vulgar message. And she received a response the next morning, much to her surprise. Kallie was so happy since her mother was so kind that she posted her conversation on her Twitter account. Her tweet immediately went viral with over 200K likes. Everything started when Plagge wrote a review for the popular game Days Gone. Plagge observed, “Most aspects of Days Gone lack purpose.” “Its many narrative threads flirt with being meaningful and interesting but never quite commit, with characters whose actions and motivations don’t make sense.” The final score is just a five out of ten.

However, Kallie’s colleagues did not agree with her. Based on user ratings on GameSpot, the average player score was 8.4. Plagge claimed she received more than two dozen personal Facebook messages and several tweets from dissatisfied game fans in addition to the over 950 comments her story garnered. Plagge told The Daily Beast, “It was very clear [from] very early on that it had nothing to do with the content of our review.” “It was very much just that guys wanted to find an excuse to say sexist things to women.”

Here are reactions of people about the whole situation 19 Funniest Design Fails That Demonstrate How Important Proper Spacing Is

15 Signs That Are So Full Of Impeccable Irony

10 Best Animal Jokes That You Can Not Hold Your Laugh

Woman Is Taken Aback To See A Photo Of Her With Her Boyfriend On A Chinese TV Show, But With Her Head Cropped Out

25 Reminders That Toxic Masculinity Is Still A Problem

40 Funny Questions To Ask Your Friends