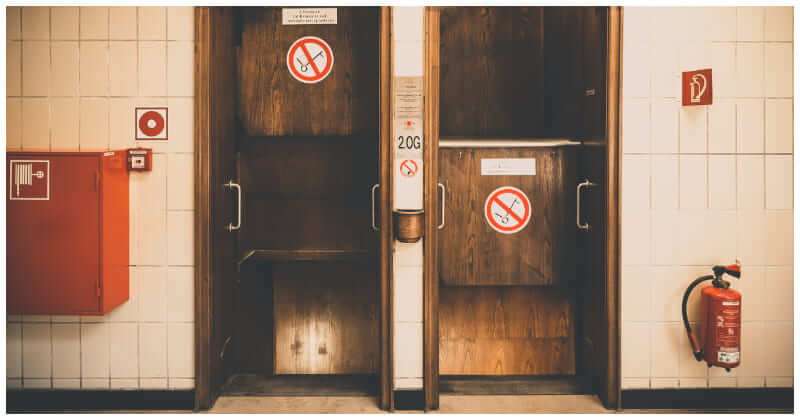 Although the elevator model has a constantly moving and extremely scientific structure, it can become a deadly trap for the careless. An elevator is a vertical device for transporting people or goods between the floors of ships, buildings or other structures. Modern elevators are often equipped with electric motors that pull the cables and counterweight systems such as cranes, or hydraulic fluid pumps to raise a cylindrical piston.
Ordinary elevators operate according to a very safe mechanism, when the elevator arrives at the same level with the floor, the elevator door will open. It will only continue to run if people enter and the door closes. If, for some reason, the door does not close completely, the elevator won’t keep running. However, the Paternoster ladder is completely different, granting itself the name “The most dangerous type of lift in the world.” The first lift of this type was installed in Dartford, UK in 1884. Seven years before, its patent was registered by a British engineer named Peter Hart. The name paternoster comes from the Latin word “Our Father”, which is the first two words of “The Lord’s Prayer”. Paternoster was later introduced to the Netherlands and Germany. Paternosters became very popular in Europe during the first half of the 20th century because they could carry more passengers than conventional elevators. Furthermore, it is also an extremely quick method of moving because there is no need to queue.

Most Paternoster lifts do not have landing doors, cabin doors or screens for added convenience. People would have to wait at the landing door and must promptly step into the elevator cabin when the elevator arrives, otherwise they will miss it. This makes passengers even more vulnerable, because they can lose their balance and fall out while the lift is moving, even though it is many times slower than a conventional elevator.

Many people have died using this type of elevator, some of which even fell into the pits. Therefore, this system is not suitable for the elderly, children and people with disabilities. Paternoster elevator runs at a very low speed of only about 0.3m/s, but the operating principle plus the absence of a landing door pose a threat to all customers in usage.

Between 1970 and 1983, five people died using this lift at Newcastle University. In 2012, another 81-year-old man died after falling down a lift.

With this terrible level of risk, Paternoster has been banned in many countries. However, for those who are still operating, investors have been installing doors and modern control systems so that they can operate like conventional lifts.

Where Can I Watch Selena Gomez Documentary: My Mind And Me