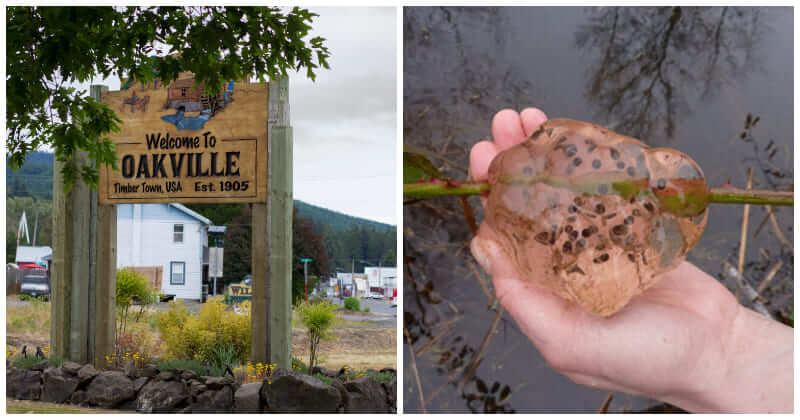 From time immemorial, mysteries have always troubled to scientist. Up to now, despite the most advanced technologies, some supernatural phenomena have remained inexplicable. One of the most typical cases is the Oakville Blobs.

The rain turned out to be blobs

The bizarre incident happened on August 7, 1994 in the town of Oakville, Washington. Around 3 a.m., some people suddenly heard the pitter-patter outside, thinking it was a drizzle following the previous storm. However, the unusualness was that time, that “rainwater” looked more like glue that dripped very slowly on the window glass.

The blobs in people’s hands.

Going outside, the townspeople began to note that it was a strange, gelatinous substance they had never seen before. It fell a total of six times over the next 3 weeks.

Local officer David Lacey shared that when he was on patrol that night, his wipers couldn’t wipe off the substance, so he had to pull over at the gas station. “It was very mushy, almost like if you had a jello in your hand.”

Initially believing that this was just a rare event that would leave no harm, on the evening of the same day, David and hundreds of Oakville residents suddenly had difficulty breathing. The symptoms were similar to those from flu but more severe, causing the patients to have extreme vertigo, blurred vision, and an increasing sense of nausea that didn’t wear away even with the help of medicine.

Even the doctors couldn’t explain this disease, which lasted from 7 weeks to 3 months for those contracted.

No one could explain what this goo was, only knowing that it brought disease.

The peak of this epidemic was when dozens of cats and dogs came into contact with the substance fell ill and dead. At first it was thought this was just a coincidence, but then a town resident, Mrs. Dotty Hearn, confirmed her pet cat died after being exposed to the blob for a few hours.

The event remained a mystery despite the proof

After the incident, Dotty’s daughter, Sunny Barclift, collected the sample and sent it to the hospital. Lab techs were surprised to discover that it contained… human white blood cells.

After various studies, they were astonished again, as the sample contained two types of bacteria, one of which is normally found in human intestines. Still, no one could identify what they were and how they caused illness among the entire town.

The town of Oakville, where a rain of goo brought an inexplicable disease.

Dr. David Little, who discovered human white blood cells in the in the substance, brought the specimen to the Washington State Department of Ecology for further study, whose staff said that the white blood cell looked like a Eukaryotic cell: complex, nucleus-containing cells present in most living creatures.

One of the staff, Mike Osweiler, speculated that the substance could have been human waste from an airplane. However, the idea was immediately rejected by the Federal Aviation Administration, whose regulations require that to be dyed blue, while the substance is white.

Some other theories suggested that this strange phenomenon came from testing a new biological weapon, or a biological attack by the military. This theory originated because residents saw military aircraft appearing every day over the town of Oakville, shortly before the rain occurred.

There are many theories about this substance, but none was completely elucidated.

There was a more convincing theory that the ‘rain’ originated from military bombings 80km offshore from Oakville, causing a swarm of jellyfish to explode and fall like rain, which was called ‘Star Jelly.’

Although there have been many speculations, this incident is still left open. Later, the incident in Oakville was also ‘reproduced’ on the program Unsolved Mysteries on May 9, 1997. To this day, this remains a mystery in human history.