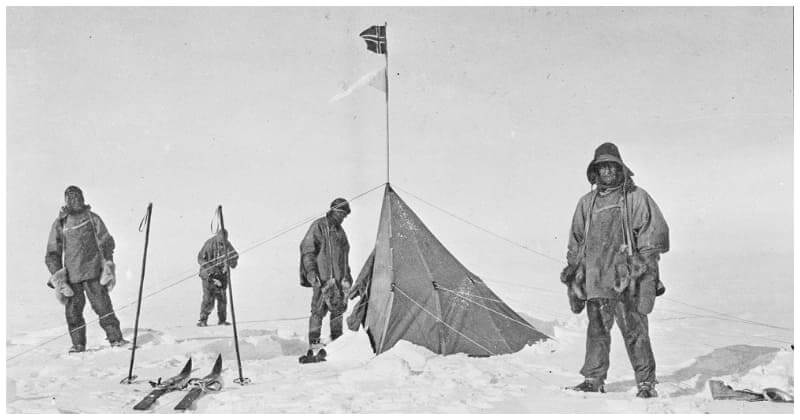 These are British explorers in Antarctica in January 1912. This photo marks the finish line of a race to discover new lands, where two expedition teams from England and Norway had traveled more than 870 miles to the coldest places on Earth and had to return before winter arrives.

At first glance, this looks like a victory photo of the British, except that they are standing in front of a hut with the Norwegian flag. And it all started to get worse from here. Robert Falcon Scott was a veteran explorer who meticulously planned this trip with the dream of becoming the first person to reach the South Pole. Together with the expedition team and scientists, he conducted researches on Antarctica and collected data on the five seasonal cycles on the continent. The chart estimates the year’s average temperature, with summers ranging from about 30.2 to 10.4 degrees Fahrenheit and starting to drop sharply from April. This chart was crucial to Scott’s decision-making process.

Scott planned to use horses for the first 435 miles to cross the Ross Ice Shelf, then shoot the horses at the foot of Beardmore Glacier, and walk to the end of the journey, which includes a 124-mile stretch across the top of the glacier, more than 298 miles towards the poles and all the way back, carrying hundreds of pounds of tools and gears.

Using the strength of horses and young men was quite reasonable for Scott at the time, as British explorers used this method to transport equipment during a previous Antarctic expedition. Plus, having no experience with dogs, British believed that human power was the most certain way to climb to the glacier and to the Antarctic Plateau. It’s been an arduous, challenging, slow and even daunting journey, but Scott’s expedition team wasn’t alone. On the other side of the race was Norwegian explorer Roald Amundsen, whose expedition camped not far from Scott’s. Amundsen also wanted to be the first to reach the South Pole. The Norwegian expedition team were all seasoned skiers who knew how to navigate in cold conditions. Furthermore, they knew how to use dogs.

News of the Norwegian expedition made Scott somewhat nervous, but he remained optimistic. Amundsen started about 95km close to the pole but chose a route not yet proven to be traversable. Accidentally encountering an unknown obstacle or falling into an unknown ice trench could slow his expedition. But the Norwegian explorers showed their professionalism despite the circumstances. By the time Scott reached the finish line, Amundsen’s Norwegian flag had already been there waiting for him. The Norwegians and their dogs had hit their target five weeks earlier and had almost completed the return trip when the British reached the South Pole. Needless to say, Scott and his expedition were heartbroken. They took this photo outside Amundsen’s tent on the day of the return journey. Scott wrote in his diary: “I’m leaving this message to let everyone know that some friends and I visited the hut, Bowers was taking pictures and Wilson was painting. We will return with a journey of more than 1,200km. Goodbye distant dreams!”

This was the time when all the trouble crashed over the expedition party. The photo was taken in mid-January, still in the middle of Antarctica’s summer. According to the expedition’s studies, the expedition team had about three months left before the temperature on the Ross Ice Shelf dropped to lethal levels, which was enough for them to make their long hike. But in 1912, things didn’t go according to plan. The real average temperature for that year was very different from what Scott measured. There have been several days in a row where the temperature has dropped to -29.2 degrees Fahrenheit. Long-term exposure to this condition is basically impossible. The first of the team died from collapse and unconsciousness after several falls on the glacier. The second, a month later. With frozen limbs that affected the group’s progress and their survival chances, he quietly stepped out of the tent, sacrificing himself in the snow storm. The last three, including Scott, had reached 17km from the supply depot before surrendering to their fat. The tent, along with the body, diaries and photos, was found eight months later. As time passed, Scott was remembered as a brave but foolish explorer but also who used horses to explore Antarctica. The problem is that Scott’s plan should have worked. Measurements from modern weather stations along Scott’s route show that his calculations were impressively accurate and correct. What Scott and the expedition experienced in 1912 was an anomaly, occurring every 15 years, turning an already risky journey hopeless.

The photo they took outside Amundsen’s hut was a sign of defeat after the end of a long race. But it’s also the starting mark of another race they didn’t even know they were participating in – a desperate race to escape from the coldest place on Earth.