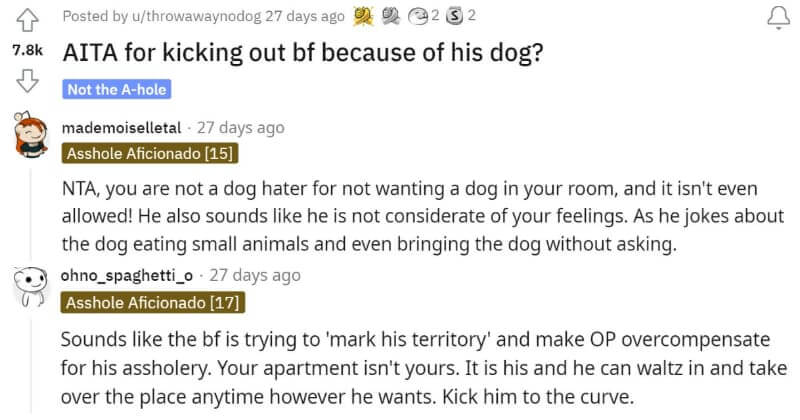 It is not unheard of couples breaking up because of having arguments related to their pets. This story is an example of that. A Reddit user has recently posted on r/AITA how she ended a quarrel with her BF after he’d brought his dog to her apartment without asking for her permission before.

But please, don’t be quick to throw a tantrum on the girl, because everything happens for a reason.

Actually, the OP (original poster) wasn’t a dog hater, and absolutely had nothing against dogs. The problem was that her apartment didn’t allow dogs, so she raised an elderly cat and a guinea pig in her house. The man whom she had been dating for 8 months adopted a dog since it was a puppy. She loved him and didn’t have any problem with his dog.

One day, he wanted to come to her place and help her replace a new wall mount. She accepted his offer without predicting the problem it would bring about.

Hours later, the BF arrived at her apartment with his 8-year-old dog, which the OP was worried about. Dogs weren’t allowed in her place, and she couldn’t imagine what to do if the security found a dog in her apartment.

The dog started to bark constantly, and when she checked it out, she realized it was barking at her pets. Her BF suggested that the pets be locked in another room so they could be safe. He even joked that his dog had killed rabbits before.

That offended the OP because she had small animals as well. She wanted her BF and his dog out of her apartment. The BF, on the other hand, felt unfair for him and the dog. He blamed his GF for not being a dog lover and kicking him out due to his pooch.

Before coming to the final verdict, we should consider why and how the woman behaved that way. Was she pissed off with the BF for his dog? Actually, NO! She was upset because her BF hadn’t asked her if it was OK to bring the dog. In addition, he required her to lock her pets in THEIR own home to make the space for his dog, which seemed unreasonable. The way he told about his dog killing rabbits showed that he didn’t respect his GF and the dog as well.

It was OP’s house, so it was her right to let someone in and push them out. His BF, as a guest, should be polite and respectful.

Redditors take the side of the woman, too. And here is how they reacted to the story. The Inspirational Hiking Trip Of A Man And His Blind Cat

Sal, A Man Who Is Deathly Afraid Of Cats, Is Tied Down By His Friends And Covered With Kitties