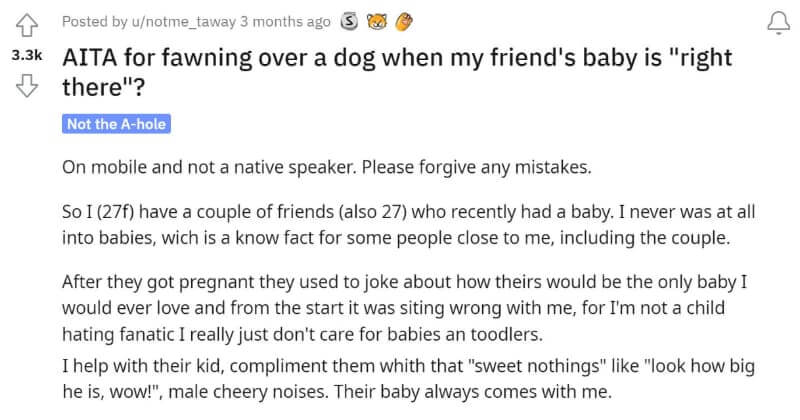 Babies and pets share many things in common, including their adorable faces, sweet personalities, and cuteness. Many people love pets, but unfortunately, not everyone wants a baby.

Don’t get me wrong, having a baby is a good thing for any family, but absolutely, it requires more than just love and care. It is the responsibility and commitment when you decide you’re ready to have a baby.

Reddit user named @notme_taway has recently shared a story of how she was judged for not being a baby lover by her close friends who recently gave birth to their own baby. They had been aware of this fact before they decided to have a child.

During their pregnancy, the couple kept joking that their baby would become the only one the OP (original poster) would ever love. Despite not having fun with the joke, the OP didn’t show up her feelings.

She was happy to provide them any help during their pregnancy, the moment they gave birth to the baby, or even when they brought up the child. She didn’t hate their kid but wasn’t excited about it either.

Their baby loved her and always came with her. And, the OP often played with it cheerfully and took it out for a walk. As a friend, she did everything she should do for her friend couple and their baby. However, the parents needed more from the OP, which was clearly shown on the day they went out together.

On the street, they came across a walking person who was lugging a big stroller. The OP didn’t notice something special until she knew that inside the stroller wasn’t a baby,  but a puppy.

The adorable puppy made her ‘awww’ at the first sight. OP even asked for the owner’s permission so that she could play with the puppy and have a little fun with it.  But things just changed when she returned home and got a message from her friends.

In the text, the couple said they felt offended that she obviously showed more care and love for a puppy on street than their child, and that she’d never seemed that excited with their kid before.

Everyone, was the OP wrong?

Well, Redditors don’t think so. Instead, they rally behind the OP and try to protect her. They say that OP is respectful of the parents although she doesn’t really like them having a kid. The parents should be thankful that the OP is still in their lives and stop telling her to like or dislike something.

Moreover, we can say that OP’s reaction to the puppy is normal because dogs in strollers are not usually caught on the streets. So, we can’t blame her for fawning over the pet.

It’s not the OP’s baby and it’s unreasonable to expect others to dote over a child that’s not theirs.

What do you think about the situation? Tell us in the comment!

Homeless Man Reunited With His Lost Dog In Heartwarming Video

30 Pets Who Join Their Owners In Halloween Costumes, And They Are Awesome

20+ Dogs Who Love Playing Hide And Seek, And Their Photos Are Hilarious!

10+ Raccoon Funny Pictures To Release Stress For The Weekend