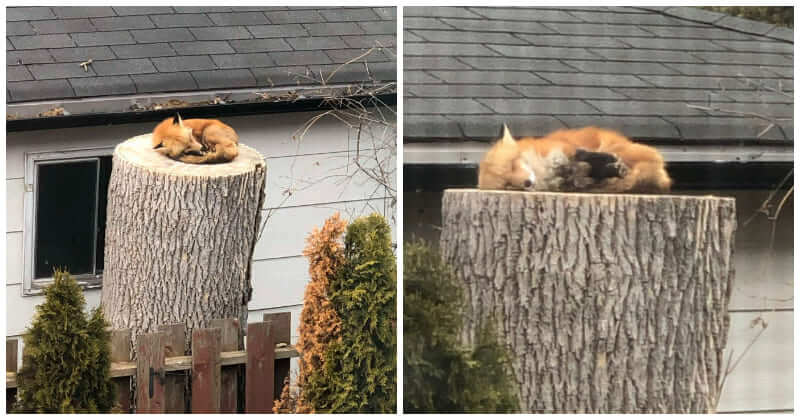 A little fox was spotted having a peaceful nap on a stump near a citizen’s house in Canada. Sara Ryan, who took some pictures of the fox, shared them on Twitter with a cute caption:

“Can we all just take a moment to appreciate the sweetest Lil fox sleeping on a tree stump in my parent’s backyard?”

Can we all just take a moment to appreciate the sweetest lil fox sleeping on a tree stump in my parent’s backyard 🥺🥺 pic.twitter.com/nDlHrgdmfH

The fox was initially discovered by Ryan’s father on Tuesday while he was following a seven-day self-isolation at his home. Through a glass window, he saw it snoozing calmly on a dead tree that had had half of its trunk cut off last year. And for some reason, the presence of the creature brightened up his day. “My father was ecstatic!” Ryan told The Dodo about it. “They’ve been socially isolating themselves and don’t have pets, so I’m sure they were thrilled to have something unusual in their yard!”

When other members of the family were informed of the scene, they felt delighted as well. Although they hadn’t had a real interaction with the wild animal, they could sense that it was a friendly and lovable fox. “When my father stepped outside, the fox looked up and then went right back to sleep,” said Ryan. It seemed like the fox felt cozy and safe staying in his ‘outdoor’ bed.

“The tree is protected by the garage behind it so it only faces my parents’ yard,” she added. “I imagine that it’s a warm and safe place to nap!”

At the end of the day, the fox woke up and left the area. Since then, Ryan and her family have kept track of the wild fox. They told that it returned on the next day, and maybe the tree stump was its favorite spot. Ryan’s father was happy to see the fox come back. He didn’t expect to make this new friend right in the boring days of quarantine.

Wally The Bunny With “Wing-Like Ears” Is Famous On Instagram, And He’ll Win Your Heart