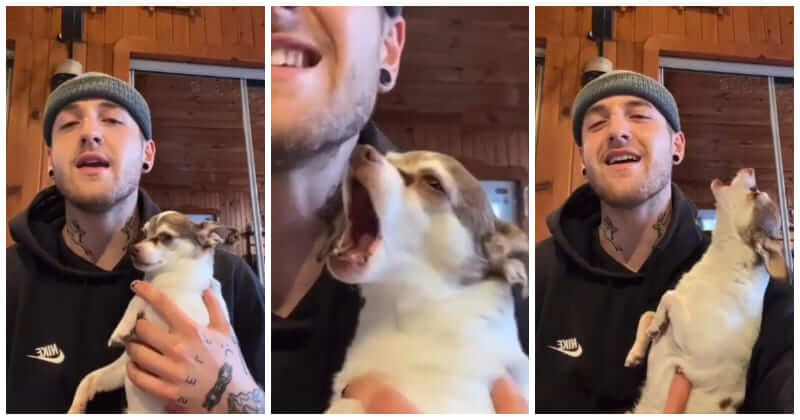 A little Chihuahua has recently become an Internet star after the video of him singing Gnarls Barkley’s song ‘Crazy’ was posted on Tiktok. This isn’t the first time we see dogs showing off their talents, but it is the way this chihuahua reaches high notes that earns millions of hearts. The hilarious footage shows the dog, named Bamboo, sitting with his 22-year-old Canadian owner, Martin Gratton, before an impressive moment comes to viewers. Gratton gently gives a kiss on his dog’s head, asking if he is ready for the show.

As the man starts singing, his dog begins to howl, creating the most adorable duet that sends everyone crazy. Then, the chihuahua becomes engrossed in the song, reaching the high notes not only once, but twice. People are madly in love with the moment and their excitement about how talented Bamboo is.

Fans of the dog have jokingly compared his high notes with those of famous singers. One comment stated “Is that Ariana Grande?” and another replied “Omg, it’s just too much!! Love it!! He knows exactly what he’s saying!”

Netizens share that this is an adorable moment and they love it. “I can’t stop, omg this video this video is so precious I loveeeee this,” wrote a user. Responding to people’s affection, Gratton started to provide more details about his dog:

“He really likes to sing and I think it’s really cute, so I had to share it with the world. Every time someone in my household starts singing, he can’t resist and automatically joins [in].”
I have not trained my dog to react to it, it’s just natural for him.

“The first time we realized he liked to sing, we were sitting in the living room watching a hockey game and the national anthem was starting.”

“When the performer started singing, he joined in all of a sudden.”

“We were all really surprised and we were laughing so much.”

They Only Have Each Other: Man On Street Sleeps Cheek To Cheek With Dog Safely Wrapped In His Arms