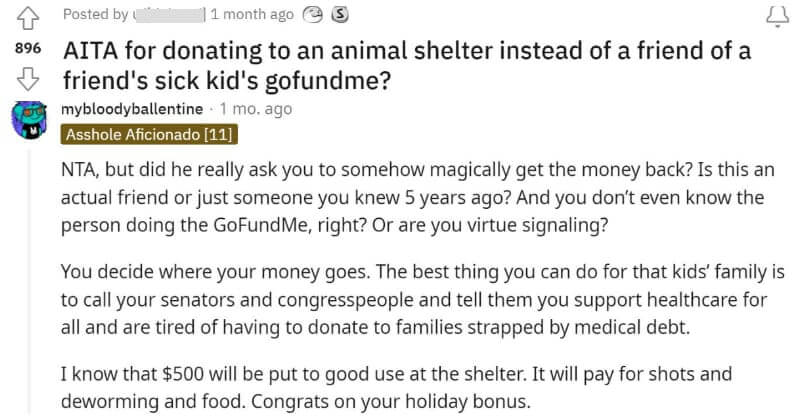 When it comes to friendship, we’ll never mind giving our friends a hand if they need help. And, there are times we need their help in return. However, when our support is taken for granted, we should raise our voice and stop it.

A Reddit user has recently raised a question on r/AITA whether she’s an as*hole for donating to an animal shelter but not a friend of her friend’s child.

Her friend, a 25-year-old male, knew her from high school, but they didn’t come to a close relationship at that time. Graduating from high school, the two haven’t met again, and haven’t had any contact as well.

Recently, the former friend sent her a link to a GoFundMe account that his friends had created for their kid. The child suffered from cancer and was about to go on surgery. The OP felt bad for them, so she offered to send them $500 (she had donated $500 out of $2000 of Christmas bonus to an animal shelter, and decided to spend the rest for her own).

The friend, on the other hand, was angry at her. “He said that the kid is more important than a bunch of dumb animals,” the OP wrote. He even wanted the OP to take the money back from the shelter and give it to his friends instead.

When everything crossed the limits, the OP refused her old friend’s requirement. She hoped him to understand how much the shelter meant to her, but he didn’t. The friend said that she was TA for deciding to support animal care while she was able to help the kid and its family.

After her story was shared, it received a thousand upvotes, and hundreds of people started to give their opinions.

They showed their agreement with the OP and blamed the friend for his outrageous demands.

Firstly, he was just someone she knew five years ago, and now, he asked for her help for his friend’s child. Simply, the OP could refuse to give a donation because she didn’t know that family.

She was the one who could decide where her money goes. At least, she wanted to donate $500, which was not a small amount, so he should’ve thanked her instead of being that toxic.

Moreover, who knows whether GoFundMe was a real account, or whether it was created by the wrong hands for another purpose.

Some people suggested blocking him.

And more people supported the woman.

10+ Hilarious Photos That Prove Cats Are The Biggest Assholes

17 Scary-Seeming Animals That Are Actually Friendly And Sweet

Meet Kitzia, The New Grumpy Cat Who Looks Even Angrier Than Her Late Predecessor

Born Circa 1832, Jonathan The Tortoise Is Now The World’s Oldest Animal On Land