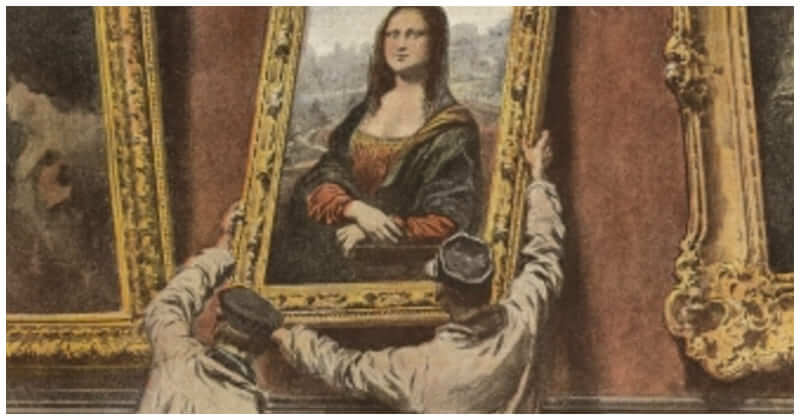 Leonardo da Vinci painted Mona Lisa from 1503 to 1507. At that time, the painting remained unnoticed until the early 20th century, when a theft happened that made this painting well-known to everybody. On August 21, 1911, employees of the Louvre in Paris, France announced that the portrait of the Mona Lisa had been stolen. An investigation was conducted to find and arrest the theft, causing an uproar in the French capital.

The press, the media and the public were all curious and closely followed this event. Even the Paris-Journal newspaper announced a reward of 50,000 francs to anyone with information about the painting’s whereabouts. People flocked to the Louvre just to observe the scene of the theft. The investigation began with a list of suspects that surprised everyone, including the name of the painter Picasso. Painter Pablo Picasso was said to have arrived in Paris in the 1900s, befriending the poet Guillaume Apollinaire, who had a secretary, Gery Pieret. It was Pieret who stole the Iberian sculptures on display at the Louvre and sold them to Picasso. As for Picasso, he was very interested in collecting Iberian statues and did not hesitate to pay Pieret without knowing himself being dragged into the theft of Mona Lisa.

In 1911, Pieret had a bad luck so decided to steal more from the Louvre. Apollinaire discovered the incident, warned and fired Pieret. To take revenge on his boss, Pieret, upon being arrested by the police, told the press that the stolen objects were at the house of Apollinaire and Picasso. Immediately, the police searched and seized the items stolen from the Louvre, arresting and interrogating Apollinaire and Picasso. This shocked the public, making people start to believe and spread rumors rumors that the two famous artists were the heads of a cross-border art theft gang.

On September 18, 1911, the trial of two suspects, Apollinaire and Picasso, took place. The two of them were so frightened that they could not give any clear testimony. Picasso was even so scared that he denied his friendship with Apollinaire, enraging the poet. After a while, with no result and evidence, the judge declared the two artists innocent, not related to the Mona Lisa theft. As time kept passing, the search for Mona Lisa’s whereabouts fell into a stalemate. It was not until December 1913 that the painting was found in the small room of Vincenzo Peruggia, an Italian immigrant, who took the painting to the Florence art dealer. From there the lost Mona Lisa was officially revealed.

The theft that stirred the French public ended when Peruggia was arrested and sentenced to 7 months in prison. However, the motives and causes of Peruggia’s criminal act have remained a mystery for experts to this day. According to investigation results, Peruggia testified that he stole paintings to prove his patriotism. However, for many people, Peruggia’s theft has many underlying reasons behind it.

Director Joe Medeiros, who has made a documentary about Peruggia, believes that in fact, the art theft stole the painting to sell it to American millionaires. The theft of Mona Lisa was just to prove that the painting was ‘real’. At the time of the theft, Peruggia was a 29-year-old artist who participated in making glass panels to protect the masterpieces at the Louvre. Therefore, he knew exactly the location of the exhibition and preservation of Italian artworks, including the Mona Lisa. Peruggia once read records that King Napoleon had taken many Italian art treasures and brought them back to Paris. As a result, he believed that the properties in the Louvre were illegal.

Since then, he has come up with an idea of a shocking heist. Peruggia took advantage of the day the museum closed for general cleaning, disguishing himself as a worker and ran off with the precious painting. Unexpectedly, thanks to Peruggia’s foolish act, the Mona Lisa has become one of the most famous paintings in the world. Besides, some other studies showed that Peruggia was too depressed, tired of his career when he could not achieve his desired success. He was mistreated by his colleagues, and the community shunned him as an immigrant without a stable job. So, he became depressed and intended to steal paintings to change his life.

In the end, Peruggia had to spent his life in prison and the Mona Lisa painting became famous around the world. One person’s mistake was indeed, a lever to help the artwork have the opportunity to shine brightly and write his name in history.