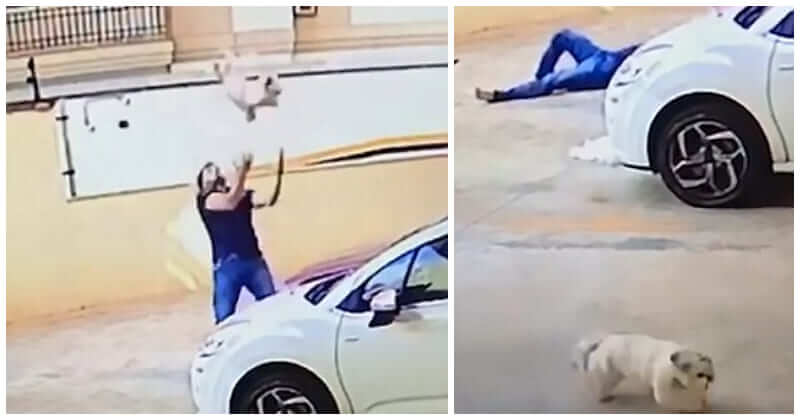 CCTV in a building in Ribeirao Preto, Sao Paolo has recently captured a breathtaking moment a man saved a dog falling from a 9th-story balcony.

Joao Augusto from Brazil had just parked his car in front of the building when he heard some screaming from almost 100ft above him. A dog, named Mel, was hanging down a railing and was about to go over.

Realizing the dog was in real danger, the man had nothing with him but a warm heart that encouraged him to rush out of the car and leap into action. Immediately, Augusto raised his arms in a ‘ready’ position to catch the pet.

Within seconds, the dog fell into his arms, knocking Augusto over. Mel was able to stand and run and no injury was found on his body, although the dog had fallen 30 meters and slipped through Augusto’s grip. “Then, she fell from the ninth floor. I knew that I wouldn’t be able to catch her but I was aware that I could cushion the fall.” the man recalled of the terrifying moment.

“I was on the floor for a few seconds but it was from relief. I think that I was in the right place at the right time.”

Asked whether he was proud of his actions, Augusto shared:

“I did what I could, the most I could to help. It was a joint effort with the caretaker who acted quickly to help the dog. It was a happy ending.”

The building’s caretaker, Paulo Narciso, was the first one to find the pet, went up to the flat to inform its owners but they weren’t home. But he was happy that the dog was finally saved from the fatal accident.

Mel’s owners, on the other hand, were scared when heard of the moment. They installed protective netting on the balcony to protect the pet. Also, they thanked Augusto for saving their dog and calling him a real-life hero. Miraculous Recovery: How A Hole-In-Head Dog Was Saved And Found Her Dream Home

Couple Of Best Friends Chihuahua And Pig Rescued Together In Arizona