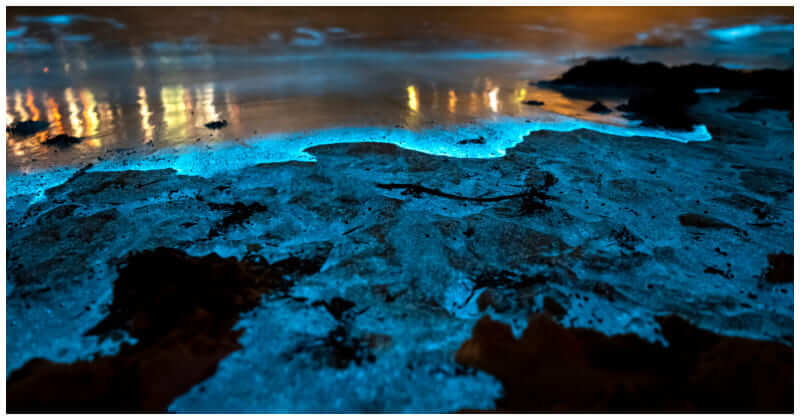 The author of “Twenty Thousand Leagues Under the Sea” calls this strange phenomenon “The Milky Sea”. For hundreds of years, words have been spread among sailors about a mysterious phenomenon occurring far away in the deep ocean: While sailing at night, some sailors saw a long, pale, milky, blue light, glow in the middle of the vast sea. In the past, many seafarers were terrified upon seeing this ” Will-o’-the-wisp-like” light.

As this phenomenon could not be explained, those who did not witness claimed that the seamen were confused because of hunger and fatigue. Centuries have passed and until now, there have been still rumors among mariners about a vast, strange light strip that only appears at night on the sea. Still, these events have one thing in common: No one has been able to explain them. However, the French science fiction writers – Jules Verne (1828 – 1905), author of “Twenty Thousand Leagues Under the Sea” (1870), did not miss out on this strange phenomenon and used the term “The Milky Sea” to describe it. And it occurs a lot in the Indian Ocean region.

135 years later: Scientists begin to find out the truth

In 2005, a team of scientists led by Dr. Steven Miller of the Naval Research Laboratory – Marine Meteorology Division in Monterey, California (USA), decided to find out the truth about the strange tale. They used data collected from satellite sensors to confirm the “Milky Sea” phenomenon reported back in 1995 by S.S. Lima, a British merchant ship, in the northwest Indian Ocean.

On January 25, 1995, the Lima reported that “on a clear moonless night while 150 [nautical] mile[s] east of the Somalian coast, a whitish glow was observed on the horizon and, after 15 minutes of steaming, the ship was completely surrounded by a sea of milky-white color with a fairly uniform luminescence… It appeared as though the ship was sailing over a field of snow or gliding over the clouds” Images recorded from satellites show that, in the northwestern Indian Ocean, an area of low-level light, about the size of Connecticut (with an area of ​​5,543 square miles), appeared at the date and time recorded by the S.S. Lima.

After confirming that the stories that were true, scientists began to research to find out the cause behind the phenomenon. Scientists began to collect water samples in the area where the milky sea event occurred, and found the presence of bioluminescent bacteria in the water, scientifically known as Vibrio harveyi. This is because the bioluminescent bacteria use two substances in a chemical reaction to produce light: One is luciferin, aa substance that produces light; the other is luciferase, an enzyme that catalyzes the oxidation of luciferin, which then produces light as a by-product.

Unlike Dinoflagellates that are luminescent to avoid predators, Vibrio harveyi are luminescent to “hunt” fish! The light that this bacteria produce is very attractive to fish. When swallowed by the fish, these bacteria drift into the fish’s intestines – which is their favorite “home.” The puzzling point among the scientific community is that a luminescent bacterium itself has a very faint light, and to create such a massive light area, it takes at least 40 billion trillion of bacteria gathered together. The fact that bacteria gather together with such unusual density has not yet been scientifically explained.

Dr. Miller said that, with the help of a much more modern satellite system today, he hopes that the luminescent seas will be recorded more to grant biologists better opportunity to get more definitive answers behind this strange sight.