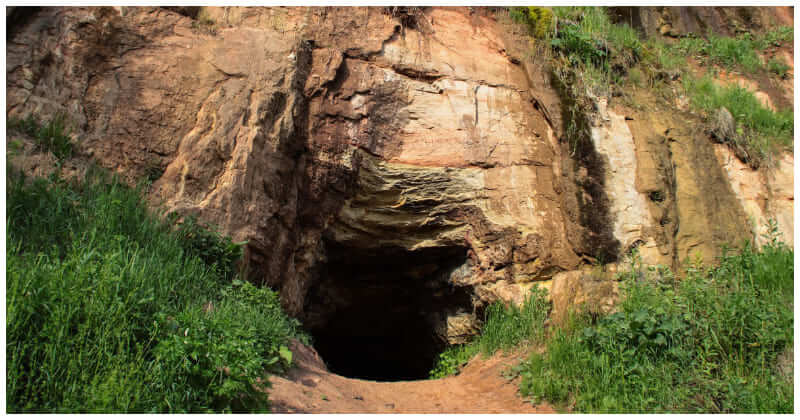 Russians have many rumors about the Sablino labyrinth, the most famous being the “curse” of no return for those who dare to enter. About 40 km from the city of St. Petersburg, the silent Sablino station is located along a small residential area on the banks of the Tosna river. Steeped in history, today’s Sablino residential area changes its name to Ulyanovka.

What makes Sablino famous is a system of underground labyrinths stretching for dozens of kilometers, with entrances scattered among all 14 riverside caves.

“Meat grinder”, “guillotine”, “fly swatter” or “tram” are just some unofficial names assigned to the subterranean passages by locals. They call it “tram” because the feeling of walking down this maze is like being stuck in the middle of a tram at rush hour.

How did the Sablino caves appear?

In the 18th century, on the banks of the Tosna River, quartz sand mines were active. Sand floated on barges to St. Petersburg, serving the Imperial Glassworks workshop. It is believed that the caves are formed as a result of the sand extraction process. By 1922, the construction boom in St. Petersburg has cooled, and the sand on the Tosna River has been mined to the point where it is no longer profitable. Kilometer-long network of shafts and mines along the river were abandoned. Over the decades, groundwater erodes sandy soils, radically changing topographical structures.

“Both my paternal and maternal lineage can be traced back to these parts. My grandma used to tell about how they hid in the caves during the first days of the German occupation [in WW2],” said a former resident of Ulyanovka.

After that, the Sablino cave system became a haven for the disgruntled, gangsters, thugs, and random people who discovered that life underground was like a game. According to one person once lived in the caves, in 1982 – 1984, there were about 300 people resided under these tunnels. ” It was utterly incredible. Dozens of people lived there in the catacombs, read philosophical works, pondered the idea of a new revolution…”, said Alexei Gurevich, a member of Pilgrims, one of the cave-dwelling groups.

“The biggest sinkhole – which could have easily accommodated the entire State Kremlin Palace – we called the ‘morgue,’ because they used it to dump dead dogs, apparently to try and smoke us out,” Alexei said.

However, that was not the worst. “Sometimes people disappeared without trace. To begin with, it was all blamed on the police and the secret services, but it soon became clear that something else was at play. When one of the group leaders vanished, rumors spread about some evil force. What it was, I don’t know,” Alexei recalled.

It is because of this mysterious disappearance that the Sablino cave system is also likened to the Russian version of the Bermuda triangle.

Today, tourists with strong nerves can visit Sablino on tour, experience the feeling of adventure under this maze on New Year’s Eve, Halloween or Friday the 13th. The caves located on the left bank of the Tosna River are safer, with an entrance fee of 550 rubles (about $8.7). However, the right-bank caves are often eroded, which means that there are no tours here (although it’s not prohibited to enter). Despite, or maybe, because of the obvious danger, the right bank is more attractive.

Oksana Chudnova, who visited the Sablino labyrinth in 2007, revealed: ” In the Pearl cave, you can easily get lost. The most unpleasant thing is the ‘skin-scrapers’ – narrow shoulder-width passages no more than 50 cm high. But there are more cheerful places, too.”

Speleologists exploring the cave often refer to Sablino with phrases such as underground “quicksand” and “sandy marshes”. The explanation, though not convincing, for the disappearances is that the victims are sucked into sticky wet sand pits.

According to some rumors, the Sablino tunnel system is much longer than many people believe, stretching to St. Petersburg or even to Lake Ladoga (more than 70 km). Such large-scale passageways could have been used for military purposes. However, some Sablino fans believe that the caves may be a space-time anomaly. “A strange thing happened once. I was talking with the curator of the local museum, and was just about to say goodbye when she fixed me with a steady gaze and said: ‘A few years ago, a person dressed like you came and asked the exact same questions,’” Oksana recounted.

Above the Sablino caves there is a memorial to the geologists, geographers, and speleologists who died, and inside one cave a chapel has been built that can accommodate up to 60 people. This is the only underground chapel in Russia, according to Russia Beyond.

However, those in Sablino caves have a private memorial site in the underworld, where visitors often leave something belonging to the deceased, or something to bid them farewell to the afterlife (mostly tobaccos).