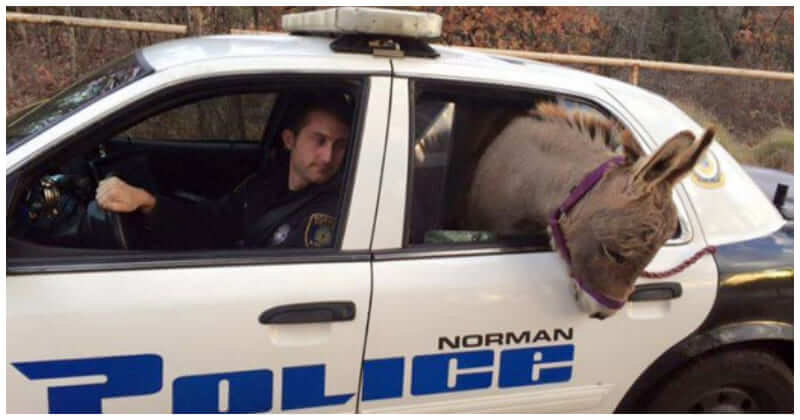 A donkey has recently become a guest of the police after they found it wandering along a rural Oklahoma road.

Officer Kyle Canaan was on duty when he received a call reporting the scene of the miniature donkey on the highway on Tuesday. It was unknown whether it was lost or abandoned by someone.

Robin Strader, who spotted the animal, quickly herded it from the busy road minutes before the police were able to arrive at the location.

Robin offered to foster the donkey, named Squishy, at her home which was miles away from the scene. The problem was that Squishy should be transported on an animal transportation vehicle which might take a few hours to get there. After some consideration, officer Canaan decided he had better drive it on his own. Norman Police Department was able to share a hilarious snap showing the policeman with an unlikely subject, donkey Squishy, in the back of his patrol car. The picture was posted on Facebook with the caption:

“It’s not every day that you see a donkey in the back of a police car. Ofc Canaan helped get it safely off the roadway.”

To the officer’s surprise, the donkey seemed to fit perfectly to the back seat: “I rolled the window down for it,” shared Canaan.

Meanwhile, Squishy didn’t seem bothered at all to stay inside the car, even in the back seat which was often a space for criminals. It got along well with the police, and the two had a fun drive. 10+ Hilarious Photos That Prove Animals Are People in “Fur Coats”