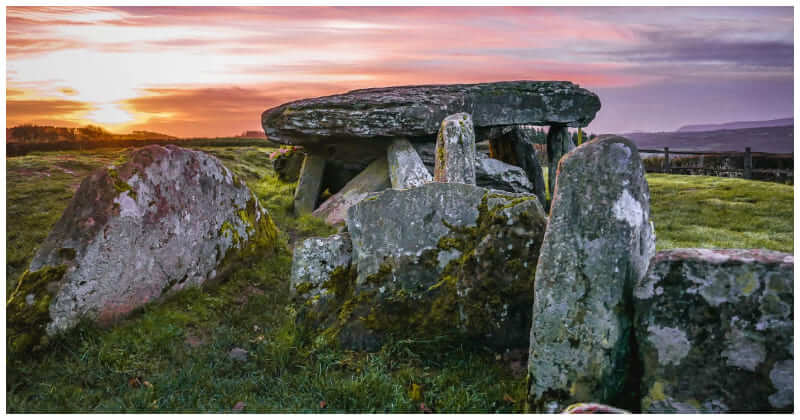 The mysterious megalithic tomb in western England, known as Arthur’s Stone because of its mythical connection to King Arthur, originated nearly 6,000 years ago as part of an elaborate “ritual landscape” around the area. This year’s excavations near the ancient stone structure in the Herefordshire countryside, just east of the River Wye between England and Wales, revealed that the site was formerly a path to an ancient architecture, said project leader Julian Thomas, a professor of archaeology at The University of Manchester in the UK. “This is a ceremonial complex like those around Stonehenge or Avebury, but it certainly implies that it was a site of political or spiritual importance in the early days of Neolithic,” says Thomas.

Arthur’s Stone consists of nine standing stones, supporting a 25-ton megalith. The passage below leads to what is believed to be a burial vault, although no remains have been found there. The structure is named by locals after the legend of King Arthur, who is said to have resisted the Saxon invasion of England about 1,500 years ago.

Excavations revealed that the first mound at the Arthur’s Stone site was the “Halls of the Dead”, which was discovered by teams led by Thomas on a ridge more than 910 meters away in 2013. The “Halls of the Dead” were originally large wooden buildings that were later destroyed by fire and replaced by three piles of earth. The remains of similar wooden buildings have been found in Neolithic cemeteries in Europe.

Archaeologists believe that the first tomb at the site was built about 5,700 years ago and aligns with nearby tombs known as the “Hall of the Dead”. Arthur’s Stone is now one of the most distinctive and most famous Neolithic monuments in England. Some local legends associate it with King Arthur. However, it must have existed several thousand years before his time, and most historians suggest that Arthur probably did not exist.