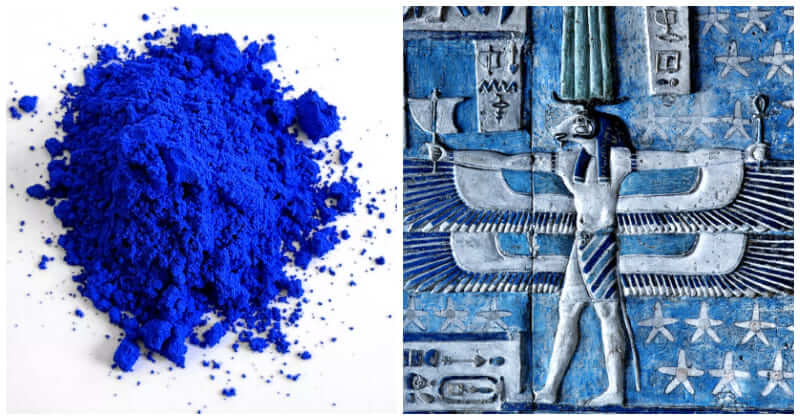 Blue is a widely loved color. In terms of nature, it is the color of the ocean and the sky, creating a feeling of vastness, immensity, depth, stability and peace.

The truth about blue

In 1858, William Gladstone, a scholar who later became Prime Minister of England, noticed something strange about the background of blue in the history of civilization development. He pointed out that, in ancient Greek texts, there was never a word for blue. Later, Lazarus Geiger, a German-Jewish philosopher also proved the same thing in most of the cultures at that time, when literature, the Bible, and fairy tales from China to Israel were all devoid of the existence of “blue”. This makes blue a color much more special than all the primary colors distinguishable by the human eye.

Ancient Egypt was the only civilization to name and understand the elegance and aesthetic of this color. They are captivated by the blue color of Lapis Lazuli, and used this material to make luxurious jewelry. The shade of blue then became a symbol of wealth, used in jewelry making for the nobility and royalty.

During the Renaissance, once iconic accessories were ground to make the most expensive pigments. From here, this color also entered the history of painting with famous painters such as Renoir and Van Gogh. Back in Greece, where the color of the sea could not be named, the sky is now bathed in that blue color. There, blue appears attractive, creating a characteristic for the Mediterranean region. This color has fascinated many people who come to Santorini, to stand on the steps by the bay, to enjoy the deep blue of both the ocean and the sky, and to drop their souls into the windows dotted with romantic bougainvillea.

Meaning of the color blue

Today, blue is considered the color of fashion heaven, the color of jeans and logo designs. It belongs to the cold color group but has a bit of warmth that softens the heat of the red.

Blue has more meanings than all other colors, and can easily be explained by being added chromas into. Bright blue: Clear, strong, independent, cool (the meaning of this color comes from the blue of the sea, some of which are more tangible).

Light/sky blue: Peace, serenity, highness, faith, vastness (the meaning comes from the blue of the sky). The majority of blues convey feelings of trust, understanding, loyalty, and clarity.

In design, using blue to highlight your design and to combine it with other color make the design more creative. Blue is the only color that can keep itself even when placed next to other colors.

Blue evokes youth, freshness, passion for creativity and constant effort. In graphic design, blue is used a lot in logos and banners of products aimed at young people, as well as a symbol of knowledge and sharing. Varying viewpoints on the shade of blue

Micah Nathan, an American writer, wrote on Kinfolk that this strange blue is an inspiration in design, fashion and interior, as well as a basis for artists to create their own distinct blue. “It’s a color you see once and never forget,” Nathan wrote.

Meanwhile, French artist Yves Klein, who also laid important foundation for modern European art, is particularly fascinated by blue, defining: “Blue transcends all barriers and boundaries, something that no other color has.”

In the modern world, blue has been a creative inspiration for designers, appearing in fashion, furniture and application design. “Since 1950, the shade of blue has entered fashion as well as all areas of life, including jeans and suede shoes of world-famous artists,” wrote The Guardian. This color is also used by major fashion brands in their collections. And so, “Nowadays we see blue everywhere, from navy wear, medical industry, fashion, jewelry, to technology, with the concept of healing, freshness, aspiration,” The Guardian explained.

With that special meaning and journey, the shade of always draws special attraction from modern people. Therefore, as soon as the Pantone Color Institute announced the 2020 Pantone Color of the Year, Classic Blue almost covered all of social media.

Fashion magazine Bazaar wrote: “You probably won’t be able to wait until 2020 to wear attractive blue outfits. Instead, you will be immediately conquered by this shade, which is not new but never ceases to be attractive. This color will begin to brighten your life in an enchanting way.”

25 Illustrations That Reveal The Strictness Of Modern Society Towards Women