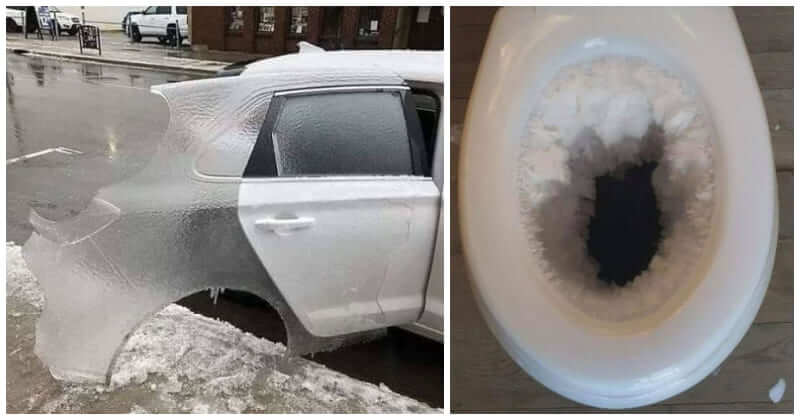 The polar vortex is a high-altitude ring of strong winds that keep extremely cold air around the Arctic region. Sometimes, like this year, it can move further south than usual, covering densely populated portions of North America. And the winter season 2021/22 arrived with a bang. Take this week for example. The winter storm has caused mayhem on roadways in the eastern portions of the country, and frigid cold for the north.

Because such extremely cold weather can be dangerous to human health and traffic, everyone is advised to stay indoors. However, winter has even occupied and messed up their cozy home. From exploding toilets to icy hairstyles, the freezing has caused many hilarious situations that people couldn’t resist capturing and then sharing with others on the Internet. Scroll down to check out how harsh it is. And don’t forget to upvote the one that impresses you the most.

#1. After two days of freezing rain, this mold came out #2. My God. We’ve reached The Day After Tomorrow #3. My brother was on one of the few flights into Chicago this morning. He took this photo of frozen Lake Michigan from the plane #5. Pray for the homeless during this time! Give to your local shelters. Most are at full capacity #6. Eyelashes on fleek! Is that a thing? Is this the new winter running fashion statement? #7. My sister opened her car door in Chicago #8. You know it’s cold when the toilet paper is frozen in the outhouse #9. Meanwhile in Minnesota. The tank exploded #10. The current level of snow in Madison: one whole flamingo

#11. It’s so cold in Iowa that we froze antifreeze #12. Lunch in Chicago today. I like mine al dente #13. A firefighter after working in the -40° polar vortex #14. Freezing our pants off #16. The landlord decided to turn down the heat today in my MN apartment as it reached -40°. But the idiot must have forgotten he pays for my electricity and doesn’t realize that I value my comfort over safety or energy conservation #17. When these are the INSIDE doors…you know we are Polar Vortexing #18. I just wanted to see how long it would take for an egg to freeze outside and also what would become of my egg #22. Letting my car heat up during the Polar vortex… #24. We had a house fire south of Cameron today. Our chief Mitch Hansen thought it was a splash park #26. Don’t try to hang dry your clothes outside… #29. My neighbor’s furnace exhaust is creating an interesting icicle #30. Living in the Midwest during this cold spell

Laugh Your Head Off With 25 Hilarious Ad Fails On Vehicles

20 Pictures That Capture Magical And Touching Moments In Life

25 Optimistic People Who Made The Best Of Terrible Situations

Laugh Your Head Off With These Funny And Ugly Pumpkin Carvings

People Share Mind-Bending Pics Of “Accidental Camouflage”, And Here Are 20 Of The Best

11 Hilarious Dentist Tweets That Everyone Can Relate To