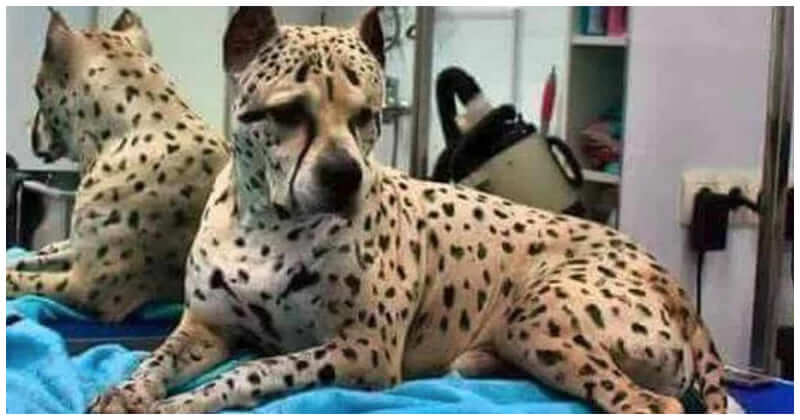 Unique dogs often take us a lot of interest and excitement. Titus Is Such A Rare Cheetah Pitbull That The Internet Can’t Believe He’s Real Whether they are insanely funny or they have a very distinct appearance, we all love these special features.

Titus Is Such A Rare Cheetah Pitbull

A dog named Titus went viral on Reddit after his owners shared a picture of him with a unique cheetah-like look. At first glance, you’ll believe he’s a cheetah, and you’ll think nothing else of it. But Titus’ owners reveal that he is a Pit Bull. It is a sich a rare, one-of-a-kind Albanian Pit Bull that there is no other individual like him in his breed.

But, even after knowing the truth, some people couldn’t believe such a dog breed does exist. Instead, netizens rather considered whether he’s a mixed dog or whether his fur pattern is artificially created.
There was plenty of reason for doubt as the owners posted only a single picture online. It seemed that Titus was sitting in a pet salon, and probably the spots in his body appeared after he was painted with non-toxic ink. Another idea suggested that Titus’ unique appearance was completely a product of photoshop. Despite different theories that denied the legitimacy of the picture, the owners once claimed on ThisisBully.com that Titus’ distinct coat was 100% natural and real. He refused to share other pictures of the canine, explaining that Titus was his girlfriend’s dog and he didn’t get her permission.

The photo gained 7.3K upvotes and thousands of shares on Reddit. Do you have any stories or pictures of animals coming from rare breeds that you’d like to share? Please let us know in the comment.

Discover One Of The Most Unique Bird Species: Flaming Bird With Angelic Christmas Beauty

Kitten Sneaks In Through Open Window, Decides To Adopt The Man Who Lives There