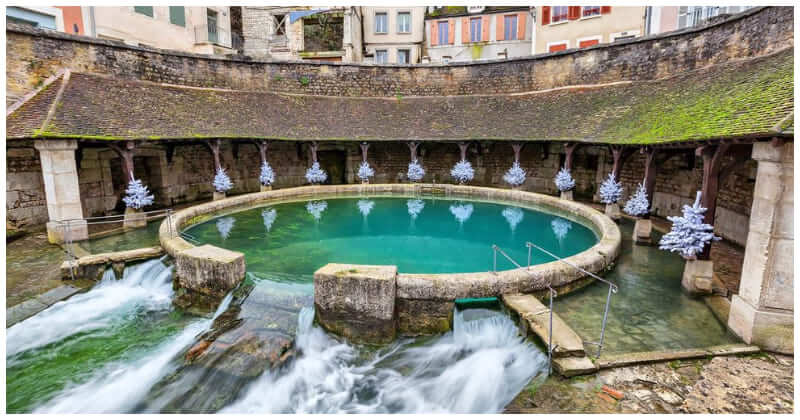 For centuries, people have been constantly trying to figure out about the origin of the Fosse Dionne spring. However, no matter how hard they tried, they still couldn’t get an answer. In the ancient town of Tonnerre in northeastern France, there is a special deep spring called Fosse Dionne.

Fosse Dionne is a karst spring (karst is an irregular limestone area with sinkholes, underground springs, and caves). Every second, the average flow of its water is 82 gallons and can go up up to 792 gallons during rains. Locals use Fosse Dionne’s water for drinking, washing, cooking and bathing. However, for centuries, they have always wondered where the spring came from.

There’s certainly a lot of water coming out of Fosse Dionne, and just like other limestone springs, the water emerges from a network of underground limestone caves. But absolutely no one can find out its origin, even many people have met their demise trying to do so. In the Middle Ages, some thought that a snake circled deep in the “heart” of Fosse Dionne, while others attributed the spring to a portal to another world.

In the 18th century, a stone wall was built around the mouth of the underground stream, with an opening for water to flow out. As time goes on, the shroud of mystery has made Fosse Dionne all the more intriguing. In 1974, two professional divers found narrow passages like limestone while diving deep into the stream. Nobody knew if they had found the source or not, but the divers never returned.

In 1996, another diver tried to discover what was hidden under the water but ended up losing his life. Years later, divers were banned from diving in the spring, until 2019, when diver Pierre-Éric Deseigne worked to solve the mystery. He dived more than 229 feet underground, swam deep into a 1214 feet rock hole but had to turn back and couldn’t find anything more.

If visitors are interested in this mysterious karst spring, it is recommended that they visit Fosse Dionne in the summer or spring months, when the water from the stream bed flows out abundantly and strongly. Visitors can get to Tonnerre from 5 airports in France, the closest of which is Paris Orly. Alternatively, they can also catch a train in Paris, from Chatelet Les Halles, Paris Gare De Lyon or Paris Gare de Lyon stations.

There are 16 trains a day running between Paris and Tonnerre, taking about 2.5 hours for a distance of more than 160 km. The sooner the ticket purchase is, the cheaper the price will be. Besides the stream, Tonnerre has many other attractions. Visitors can book a local tour to travel during the day.