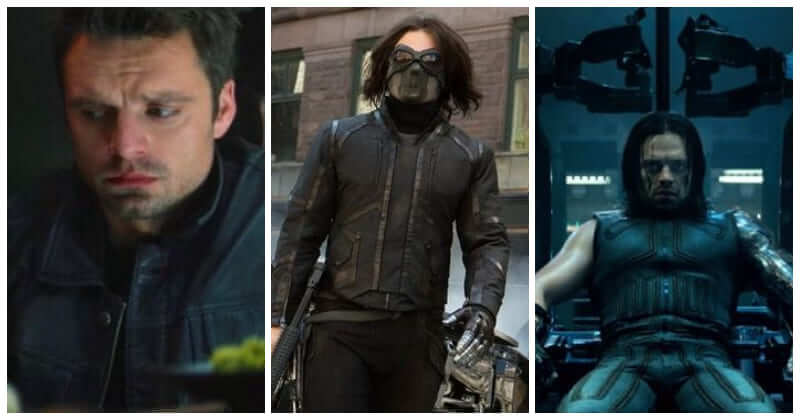 Bucky is perhaps the most controversial character in the Marvel universe. Everyone keeps wondering whether he should be accepted as a good character.

Bucky was firstly known as a childhood best friend of Steve Rogers, a small boy who is frequently the target of bullies. Bucky sometimes appeared to get Steve out of trouble. He became one of the most important people to Captain America. And, it could be said that the friendship between Steve Rogers, and his childhood friend Bucky Barnes is one of the greatest in the MCU.

However, in a mission with Steve Rogers of battling Red Skull’s forces, Barnes fell hundreds of feet from a train. Because no one could find his body, he was presumed dead. Luckily, the super-soldier serum allowed him to survive the fall.

But he was then found by HYDRA and was brainwashed to become their operative. Since then, he was known as the Winter Soldier who would kill anyone who posed any kind of threat to that organization. This led him to a sequence of savage actions, which makes people hard to forgive him and call him a hero, even after he changed again. In the mission of stopping the Flag Smashers, an anti-nationalist group, Bucky Barnes made some controversial choices.

Baron Zemo is known as a criminal mastermind who sought revenge against the enhanced individuals, such as the Avengers. But Bucky still finds him for help. He attempts to convince Zemo in that mission. He even weirdly chooses to free that master manipulator from prison. After a fierce fight with the STRIKE team in the elevator, Captain America conveniently runs into Black Widow when finding to recover a flash drive from the hospital where Fury was dead. Natasha tells him about the story of the Winter Soldier. When she was on her mission of protecting a nuclear scientist, she decided to use her body as a shield. Shockingly, Barners shot right through her to kill his target to complete his job.

#3 Bucky had killed too many people over a half-century Black Widow talks to Rogers about the Winter Soldier that he has been accredited with more than two dozen kills over the past 50 years. That seems to be unbelievable at first, however, this is exactly what he did after being brainwashed. The serum and cryostasis are what HYDRA used to keep Barnes alive for so long with a superpower just like Captain America. As Wilson and Barnes said, Barnes may have to take the responsibility for many more deaths than the intelligence community acknowledges. One of the most brutal crimes of the Winter Soldier is revealed to Iron-Man in the fighting between Iron-Man and Barnes and Captain America. It’s understandable that Iron-Man wants to kill Bucky at that time. Among many kills that the Winter Soldier carried out over the years was Tony’s parents. Tony asks Bucky whether he even remembers killing his parents. Bucky replies that he remembers all of his assassinations. Even though he was brainwashed by HYDRA, it’s hard to accept his actions.

#5 Bucky stole the super-soldier serum of S.H.I.E.L.D for HYDRA In the footage that Zemo showed Tony and Steve, Bucky not only killed Tony’s parents, he also stole the super-soldier serum of S.H.I.E.L.D. that they carried in the trunk.

That action would not only lead to the death of the person who is his close friend but also inadvertently caused the deadly expansion of HYDRA’s own program in Russia. Luckily, the program was put on ice, with Zemo suspending it indefinitely by killing the other super-soldiers. John Walker is introduced as Steve’s successor as Captain America. However, perhaps Steve did it so well that his successor is stressed by residents’ high expectation of becoming as good as he did, even better. That’s why many people seem not to agree with this new Captain. So do Bucky and Falcon. But they force Walkers to give up the shield by fighting and literally breaking Walker’s arm.

#7 Despite the fact that it wasn’t really Bucky that set the explosives at the UN headquarters, he ran away Helmut Zemo framed Bucky, at which point T’Challa makes Zemo his priority. Even though he wasn’t the person responsible for Black Panther’s father, he chose to run away. Nick Fury was tracked to Steve Rogers’ apartment by the enigmatic HYDRA soldier. Before Fury could say anything to Steve that S.H.I.E.L.D. had been compromised, Barnes immediately shot him. After that, Steve chased Bucky, but the Winter Soldier ultimately manages to escape. To be pardoned by the U.S. government, Bucky has to do two things. One is to attend regular therapy sessions. Another is to find a way to make amends to those he has wronged in the past. Unluckily, he made friends with a man whose son was killed by the Winter Soldier. The truth is that Barnes is responsible for the death of Yuri’s son but he didn’t tell the truth until after the damage is done.