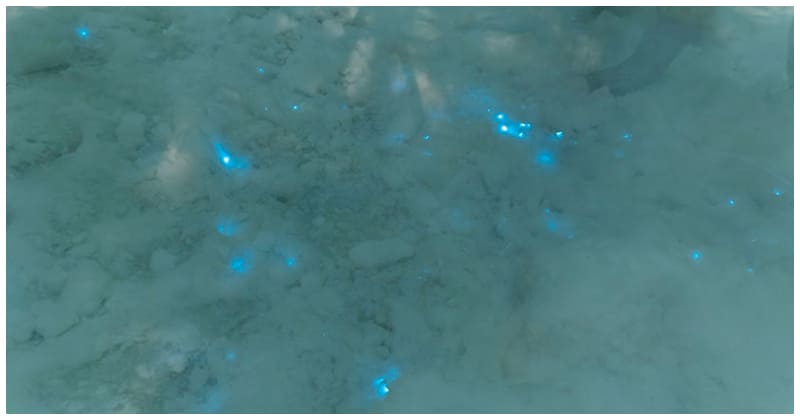 Russia is home to a lot of unique and wonderful things, and apparently, this list even includes the eerie blue glowing snow.

Last month, Russian biologist Vera Emelianenko was walking along the shores of the White Sea in Russia’s Arctic, spotted something very unusual in the snow – a blue illumination that looked like Christmas lights.

Accompanying Emelianenko were Mikhail Neretin, the son of a molecular biologist working at the same remote field station, and two dogs.

Neretin first noticed the eerie glow of blue, and as they walked to investigate, they noticed that their footsteps cast ethereal streaks of blue that were like “blue Christmas lights in the snow.”

Even the dogs left a trail of light as they run forward, and when Neretin bent down to scoop up a handful of snow, squeezing it in her hand, she only made it glow brighter.

To document her discovery, Emelianenko also invited Alexander Semenov – a photographer of the research station to capture the glowing snow layers.

Emelianenko and her colleagues just needed to walk through the snow to make them also glow on their own, whose light would then fade.

To find out what made the snow in the White Sea glow, Emelianenko took some snow samples back to the research station and discovered Metridia longa, a self-luminescent copepod several millimeters long, inside the samples. The species of Metridia longa is commonly found in the Arctic and surrounding waters, as well as the North Atlantic and Pacific Oceans.

These creatures are commonly found farther in the ocean at depths of 80 to 300 feet during the day, but only a few feet at night, when they can cause eye-catching bioluminescence on beaches.

This glowing snow has never been seen before at the Russian biological station, even though it has been open for 80 years. Ksenia Kosobokova, an expert on arctic marine zooplankton at Russia’s Academy of Science in Moscow, says the rare phenomenon could be the result of the copepods being pushed ashore by currents into the snow.

The Mysterious Pyramid Of Cairngorms National Park In Scotland