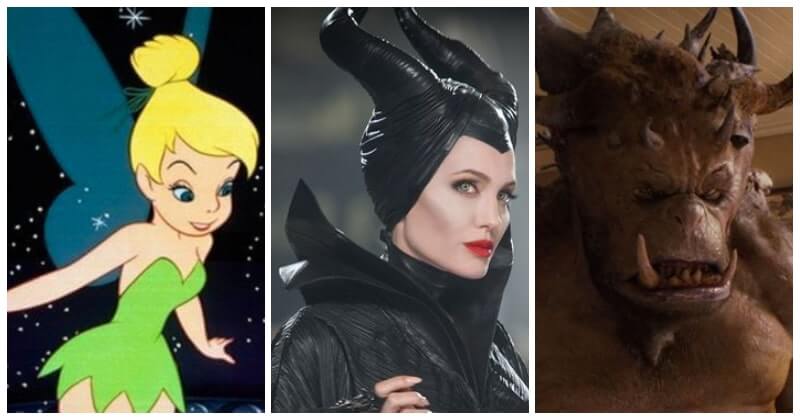 Fairies are some of the most powerful entities in ancient Celtic and European mythology. Throughout cinematic history, such magical and mystical beings have appeared in numerous fantasy films and fairy-tale adaptations. And they’ve also been popular characters in Disney’s early films.

In a lot of contemporary fiction, fairies are described as little, magically proficient beings who are cunning but not extremely powerful. They become a magical aid or an obstacle for the main characters. However, in certain fantasy films, the power of the fairies is exaggerated many times than they are in their original mythology.

Note: this list is random, not ranked by their magical power. Aurora’s beauty is bestowed upon her by Flora (red). Merryweather (green) utilizes her aggressiveness to fight Maleficent’s wicked spell, while Fauna (blue) is the most kindly of the three. Tinkerbell from Peter Pan is a small magical helper fairy. Tinkerbell’s power allows her to fix or improve any mechanical gadget that comes close to her. She also creates pixie dust, a mystical substance that gives regular people the ability to fly. Pinocchio would never have been transformed into a real boy if the Blue Fairy hadn’t used her magical powers. The Blue Fairy, as the film’s most powerful character, utilizes her powers to help Pinocchio and Jiminy Cricket in both direct and indirect ways. She is the antagonist of the film, and she wants Fiona to marry Prince Charming. Fairy Godmother concocts potent potions and is skilled in a variety of other magical arts. She can turn an ordinary frog into the King of Far Far Away in numerous years. Aside from that, she has a vast workforce and a private army, making her politically strong. Mulgarath is a powerful and fierce creature who has a shrewd intelligence and magical ability to shapeshift. Despite the fact that he can only shapeshift himself, his shapeshifting abilities allow him to nearly perfectly imitate a wide range of species. He gets their skills, even human abilities, as a result of his actions. Mulgarath takes full use of this ability, making him a formidable foe.

#7 Cherlindrea: the Queen of the Fairy Forest – Willow Cherlindrea is said to have immense abilities, despite the fact that she is just briefly seen in the film. She is the ruler of all the fairies in the forest, has incredible foresight, and is impregnable to all save the most lethal weapons. Maleficent is shown as an evil fairy who curses Aurora in the 1959 rendition of Sleeping Beauty. In the film “Maleficent” (2014 and 2019) Maleficent (Angelina Jolie) can physically alter objects through transfiguration, move things with telekinetic powers, manipulate the weather with atmokinesis, cast harmful and healing spells, pass through inanimate structures with terrakinesis, and revive decaying plant matter.