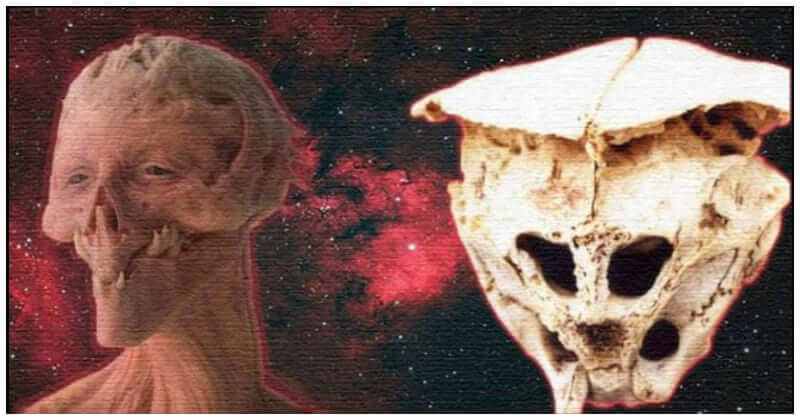 There have long been signs that alien civilizations may have visited Earth in the distant past. There is one potential piece of evidence, known as the Rhodope skull, that has been cataloged by some researchers as the ultimate evidence of extraterrestrials on Earth. There are many reasons why scientists refuse to acknowledge the existence of extraterrestrial beings on Earth, but the most cited is the absence of physical bodies or remains.

However, this reasoning often creates a deadlock situation as virtually all evidence is dismissed as hoax, or even when it is not, disappears before it can be researched. Such is the case with the alien Rhodope skull, a fascinating relic that has never been seen before. This skull was found in the Rhodope Mountains in Bulgaria by a man from Plovdiv, a city located 150 km southeast of Sofia. The unnamed man discovered the skull buried next to a small elliptical metal object.

His interesting story began after he had dream in which five human figures in metallic yellow suits direct him to a location in the Rhodope Mountains, near the border between Bulgaria and Greece. On May 21, 2001, he arrived at the place indicated by strangers and the skull had already been there. His discovery has generated much controversy and many molecular biologists have considered it evidence of the existence of extraterrestrials as well as their presence on our planet.

Initially, he presented his discovery to a narrow group of people interested in the paranormal, but the secret had not been kept for long. The skull was examined by archaeologist Katya Malamet from the Bulgarian Academy of Sciences and Professor Dimitar Kovachev, Director of the Paleontological Museum of Asenovgrad. Both said they had never seen anything like it before.

This skull is as big as an infant’s skull, but its skeletal structure is lighter and thinner, weighing only 250 grams. It has six chambers that are believed to belong to alien sensory organs.

While alive, this creature may have possessed six eyes or may have had completely different organs as yet unknown. Interestingly, it does not have a mouth hole. Professor Kovachev was sure that it is not a fossil and does not resemble any human skull known to science. “We couldn’t find any similarity or correlation with anything over the past 30 million years,” Kovachev said.

Skeptics believe that the skull belongs to an unidentified animal, although its features are unlike that of any other animal. There are several other interesting theories about this skull. The famous Bulgarian psychic Koubrat Tomov believes it belongs to a genetically modified organism, created by the Atlanteans. According to Tomov, the skull represents the remains of a failed experiment that took place thousands of years ago in that area.

Another theory is that this is most likely the remains of a hastily buried alien killed by soldiers operated in the area during World War II.

Unfortunately, the skull disappeared before scientists had a chance to perform DNA analysis and carbon dating. Whoever the present-day owner of this skull is, they clearly don’t want to share their possessions with the rest of humanity, even though it could be evidence of alien existence on Earth.