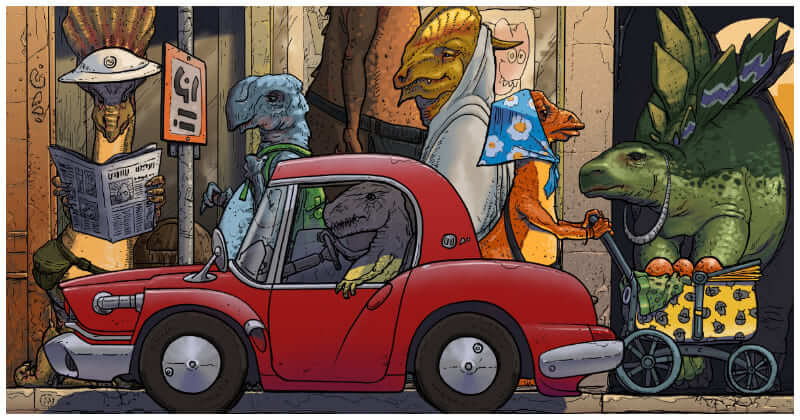 From time immemorial, a number of philosophers, scientists and archaeologists have wanted to discover exactly when and how humans actually appeared. Currently, many people believe that we are not the first higher animals to live on Earth, as there might have been previous beings that appeared on Earth before the time of Adam. The hypothesis of ​​a pre-Adamite civilization isn’t new at all. Since 170 AD there have been many controversies surrounding this issue. However, the explanations of human history taught for many years have become an insurmountable barrier and challenge the new hypotheses of today’s thinkers.

Recently, Adam Frank, astrophysicist at the University of Rochester (UoR) and Gavin Schmidt, director of NASA’s Goddard Institute for Space Studies (GISS), published their paper in the International Journal of Astrobiology, raising the possibility that there was an ancient civilization before our human civilization. Proof of a civilization that predated humans

In this new study, the scientists relied on data of events happening 56 million years ago, when the Earth’s climate warmed up dramatically. They discovered a significant change in the geological composition buried deep below the Earth’s surface in the ancient Paleocene-Eocene Thermal Maximum (PETM).

This is known as the first period of Earth warming in antiquity, marking the end of the Paleozoic Era and the beginning of the Paleocene–Eocene Thermal Maximum (PETM), which lasted about 33.9 million years ago. To support the hypothesis of a prehistoric civilization, Frank and Schmidt, studied what would happen to the remaining artifacts if our civilization also goes extinct.

Professor Frank told The Atlantic: “But there is a conundrum here. If an earlier species’ industrial activity is short-lived, we might not be able to easily see it… So it might take both dedicated and novel detection methods to find evidence of a truly short-lived event in ancient sediments.” Over the years, while many researchers have asserted that the global warming is mainly natural and ignored the hypothesis that it might have been altered by a prehistoric civilization., professors Frank and Schmidt both say their discoveries could help researchers look at evidence of life from another planet.

Professor Frank’s research is published in the International Journal of Astrobiology: “In addition, our work also opened up the speculative possibility that some planets might have fossil-fuel-driven cycles of civilization building and collapse.” Thus, the presence of plastic materials in the ocean, the use of fossil fuels and the distribution of fertilizers in agriculture could be evidence for the emergence of ancient industrial civilizations. The PETM event is thought to be the trigger for the extinction of some species, and scientists think that is largely due to methane gas. PETM is considered Earth’s first climate change event. But the current rate of global warming caused by our humanity is ten times stronger than what PETM caused tens of millions of years ago.

Frank Schmidt’s study is titled “The Silurian Hypothesis: would it be possible to detect an industrial civilization in the geological record?” The Silurian hypothesis is based on a division of geologic time scales belonging to the Paleozoic era (starting 541 million years ago and ending 251.9 million years ago). However, it is necessary to know that the title carries a completely different message. Its inspiration seems to come from the Silurian, an intelligent reptile that appeared in the popular science fiction series Doctor Who, existing on Earth hundreds of millions of years before humans.

This hypothesis is quite convincing and there is no doubt about it. However, it is also possible that the proof of the emergence of ancient native terrestrial civilizations was found and destroyed with the aim to conceal the origin of the human race. Therefore, if this hypothesis is correct, the history of mankind will be far from what has been explained by the scientific community so far.

Are you one of those people who believe that before humanity, there have been another civilization existed? Do you agree with the hypothesis of two professors Adam Frank and Gavin Schmidt? Or do you believe in old, self-contained scientific notions?

The Secret That Helps Indian-Born CEOs Thrive In The US: Only 16,000 Were Chosen From 2 Millions Applicants