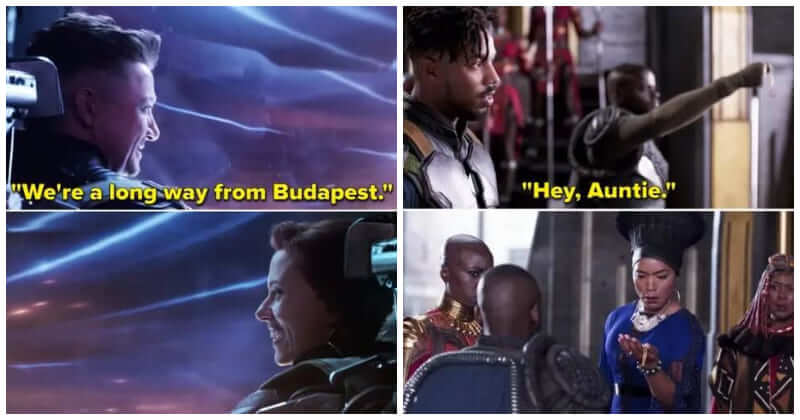 Do you notice that before fighting Yellowjacket, Ant-Man Scott adorably says hi to his daughter? Or how excited Bruce is when Thor finally arrives in Wakanda in “Avengers: Infinity War”? No? It’s understandable if you don’t spot these small moments because of the movies’ flows. But when you spend time watching them again, you can find out many interesting things.

Besides an attractive storyline and fierce but eye-pleasing fightings with a good-looking cast, the MCU has successfully conquered many fans thanks to their meticulosity in every little detail. It’s hard to realize all the fascinating moments in the first time watching MCU movies. That’s why we are here to show you several hilarious moments you have probably missed in MCU. Let’s check them out!

#1 Let’s look at Bucky’s emotion when he utters “But I knew him” in Captain America: The Winter Soldier #2 Steve couldn’t find his house key, Bucky noticed that and he knew where Steve’s key was #5 While traveling to Vormir, Clint tells Natasha that they are “a long way from Budapest” #6 Killmonger shows up in Wakanda and reveals his true identity to Ramonda. #7 In Tony’s funeral, Happy asks Tony’s daughter what she wants and she says “Cheeseburgers” #8 Wanda scrunches her nose when she’s happy and looking at Vision, Billy, and/or Tommy #9 Jimmy does his card trick when he meets Monica #10 Look at their hands! They literally hated each other, but they becomes good friends #11 Loki looks so excited when Thor is smashed by Hulk #13 After “a long trip”, two good friends meet each other #14 Hulk is actually excited when seeing Thor in Wakanda #22 After a hard trip, this is what Rhodey says to Tony #24 Luis is injected with the “truth serum” #25 Do you realize that Stan Lee always appear in any MCU movies? #26 A S.H.I.E.L.D. agent refuses to launch the helicarriers after Steve reveals that HYDRA has infiltrated S.H.I.E.L.D What Happened If Disney Princesses Had Muscles And A Big Belly

First Teaser Trailer From Taylor Swift Midnights Album! Is It A Visual Album?