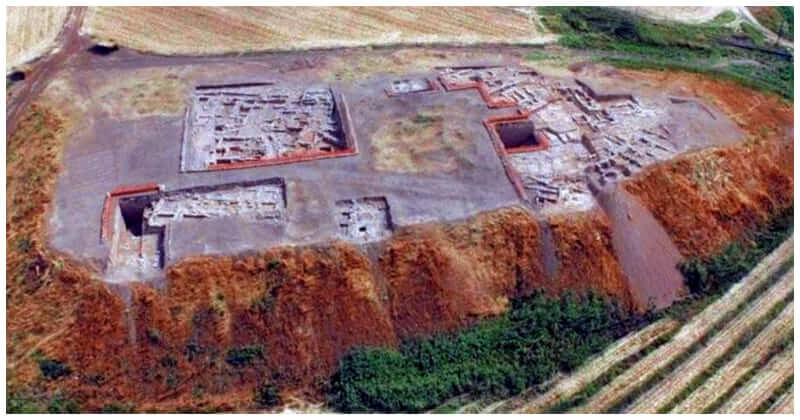 Researchers were astonished to find an ancient city from more than 3,000 years ago. In the mountainous area of Kurdistan in northern Iraq, archaeologists have found an ancient, forgotten city called Idu, hidden under a mountain.

The hieroglyphic characters carved on the stelae and the artworks found here show that this ancient city once flourished thousands of years ago. This place used to be an architectural development center with magnificent and majestic temples and palaces. Located in a valley on the north bank of the lower Zab River, the remains of the ancient city of Idu are now only a small part left. Most of the ruins were buried deep under the foundations of current buildings.

The ancient ruins here all belong to the Neolithic period, when people started farming in what is now known as the Middle East. Now, in the land that was once a prosperous ancient city, a small village called Satu Qala has been erected. The ancient city of Idu is estimated to date from 2,900 – 3,300 years ago. European archaeologists have also begun to find their way to this interesting archaeological site. Here, the old city has seen both the domination and downfall of powerful empires, succeeded by another, stronger one.

Previously, the villagers of Satu Qala had found ancient stelae around this area. As the excavation began officially from 2010-2011, researchers have found unexpected results. Very few archaeological excavations have been conducted in the Kurdistan region of Iraq. Conflicts spanning three decades have prevented scientists from getting access to the land considered one of the cradles of human civilization.

The drawings and characters carved on the stelae gave archaeologists the first clues about an ancient city that once flourished with innumerable temples and palaces. Among these ruins, they found the oldest drawings, which were decorative details for huge ancient castle complexes. For example, the image of a sphinx or a person leading a horse…

One impressive antique found by archaeologists was a cylindrical seal dating back around 2,600 years. When rolling it on a piece of clay, viewers will see an epic scene. The image created by the seal depicts a man kneeling, bowing in front of a griffin monster. Around the monster are moon, star and sun icons.

Next to it is an Iraqi symbol still called rhomb, symbolizing fertility. The image of the hero kneeling and raising a bow is said to be a symbol of the war god Ninurta. After carrying out the excavation, the researchers really wanted to expand the archaeological area, however, the migration work must be carried out first, which is a difficult and time-consuming problem. Currently, Iraq is gradually becoming a site that attracts archaeologists from all over the world.