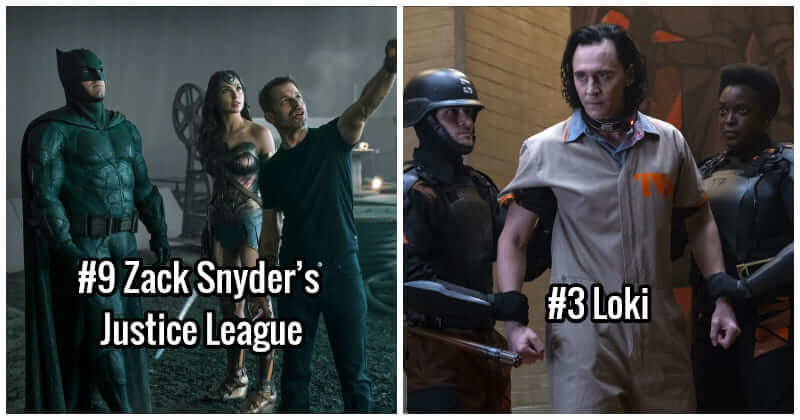 2021 was a year in which heroes were desperately needed, and boy, did it get them. Following the disruption caused by the COVID-19 epidemic in 2020, at least one superhero movie was released every 2 months in 2021. The genre’s behind-the-scenes tension competed with its on-screen action this year. This includes Zack Snyder’s unlikely comeback to the DCEU as HBO Max struggled to build a mark for itself, as well as Scarlett Johansson’s unpleasant lawsuit with Disney.

The MCU had an intriguing year, with more movies than ever and the widest diversity of reviews yet. After having waited after the lockdown, Marvel released their ambitious streaming shows on Disney+. However, by the end of 2021, Sony’s spider-man multiverse lifted the burden of the MCU rather than Marvel’s Eternals. In a year when some franchises struggle, others thrive or make their debut. Here’s our list of the finest superhero movies and shows from 2021. It’s arguably the best project MCU has released in quite some time, and it was successful in doing something that made history- bringing three generations of Spider-Man together. Fans waited a long time for this “superhero cocktail”, and none of them were disappointed. Amazon’s Invincible proposed a theory- “What if Superman was evil and insane, and had a son?” The results are not too pleasant, but it made a super exciting show. Thor’s mischievous brother deserved his solo movie, but now we think a show was the way to go for this character. Loki introduced some pretty trippy possibilities, characters, and storylines that everyone enjoyed. With multiple ups and downs, What If…? was nothing if not intriguing. It could open new doors for MCU going into the future. James Gunn’s The Suicide Squad did everything better than the previous Suicide Squad, which bombed on all levels. The movie’s biggest selling point was the introduction of some of the most exciting supervillains, practically a powerful group of misfits. Its hype is based around the proper utilization of an underappreciated character, Wanda Maximoff aka, Scarlett Witch. This superhero show is arguably one of the smartest and boldest moves by MCU.

#7 Shang-Chi and the legend of ten rings It was a future-defining movie for MCU as it introduced us to the first Asian superhero. This was a new thing for Marvel fans.

#8 The Falcon & The Winter Soldier Beginning where “Avengers: Endgame” left off, it opened with Sam Wilson surrendering the Captain America shield, feeling the mantle of the Avengers isn’t meant for him, which led to the introduction of a new and sinister Captain America. The power of the internet brought this cut into existence, and safe to say- it was everything the fans wanted. Zack Snyder even shot the ending in his backyard to include Jared Leto’s Joker. Arguably the most comic-accurate DC show of all time, Superman & Lois took our favorite couple from the comics and put them through the hardships a “normal” couple goes through. Released after Black Widow’s death in MCU, fans thought the movie was a little too late. Although, Florence Pugh shined, and fans loved the overall cast. Hawkeye started slow, but it slowly attained momentum, and now it gave us not one but two amazing archers. Eternals was not the best MCU project that came out in 2021, but it was surely the most influential one as it introduced a new group of superheroes that could define the new phase.

#14 Venom: Let there be carnage Though not better than the first one, Venom’s sequel is still a worthwhile watch and a promising addition to the MCU (because of its mid-credits scene). Netflix’s counterpart to Amazon’s “The Boys” couldn’t deliver the lofty promises it made through the trailers and teasers. However, it still deserves a place on the list because it created a heavy buzz globally.