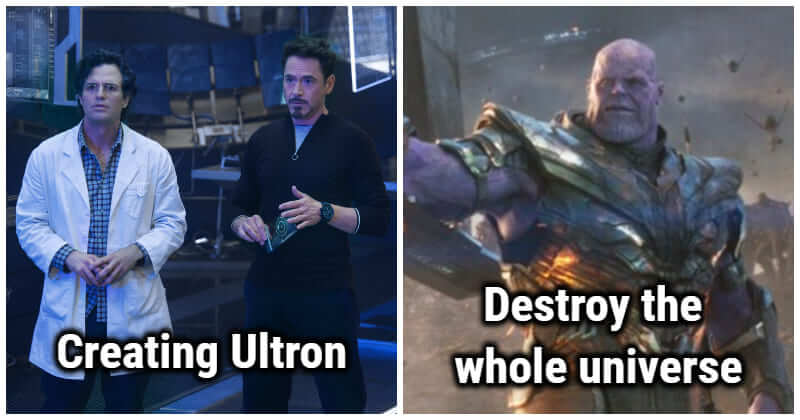 We may have always thought that superheroes only make the right decisions. They never commit a mistake because they own incredible superpowers. Well, it is time for us to change our way of thinking.

Superheroes are also humans, and sometimes they are driven by various factors that influence their emotions, thinking, and eventually, their actions. Of course, our heroes were able to save countless lives since they are great decision-makers. However, the heroes are not always thinking thoroughly, leading them to failures and even dangers to other people.

Many of MCU heroes are unexpected examples of this. Check them out below to see the times when the heroes went too far.

#1 Thanos trying to wipe out half of all life With his biggest belief that only by killing half of all life can the other half be saved, Thanos went on to collect the Infinity Stones to “save the universe”. However, this act is considered to have gone the wrong way, although its goal of saving life is humane and noble, since what he has left after the Snap is just a stagnant universe. Wanda and Pietro Maximoff embarked on the journey of avenging their parents, and they intended to carry out the plan by joining Ultron whose intention was to take down the Avengers. However, it is considered to have gone too far. In Avengers: Infinity War, the Avengers and Guardians of the Galaxy teamed up with each other and eventually succeeded in restraining Thanos. Nevertheless, when they were about to remove the Infinity Gauntlet, Peter Parker began to physically attack Thanos since he found out that Gamora had been dead, which consequently helped Thanos get the gauntlet back.

#4 Thanos trying to destroy and rebuild the universe Although he was dead at the beginning of Avengers: Endgame, Thanos managed to travel back in time and the past version of Thanos learned that the original plan of killing half of all life would not work, and so he decided to destroy the entire universe instead. We can all agree on the fact that doubling the failed plan will only lead to another unsuccessful result. Once getting the throne of Wakanda, Killmonger decided to give Wakandan weapons to the people of Africa to help them fight against oppression. Later he realized that Wakanda was wrong to become isolationist. After experiencing near-death in The Avengers, Tony Stark with the help of Bruce Banner started the plan to create Ultron, an AI that he saw as “the shield around the world”. However, Ultron suddenly awakened and concluded that the Avengers and humanity are the ultimate threats to the world. Stark and Banner made a big mistake when trying to create a global AI that only answers to the Avengers.

#7 Peter Parker trying to make the world forget him In Spider-Man: No Way Home, Peter Parker faced intense hostility from the public. He was framed for Mysterio’s murder, and therefore wanted to make everyone forget Spider-Man’s true identity by asking Doctor Strange to cast a spell. Unfortunately, the spell went wrong and put countless people in great danger. The biggest threat to Clint Barton’s life was Yelena Belova. To revenge for the death of her sister Natasha Romanoff, Belova took on the plan of killing Barton. Nevertheless, not knowing that her sister sacrificed herself for Barton, Belova almost killed Barton and only learnt the truth in the nick of time. Tony Stark is another example of how the suffer from parents loss can greatly impact a person’s emotions and actions. In Captain America: Civil War, as soon as Tony Stark learned that Bucky Barnes killed his parents, he attempted to take Barnes’ life in the most ruthless way. It is clear that our Iron Man wasn’t thinking straight and went to far to kill a man that had no other choice but to kill Stark’s parents. Throughout the series Wandavision, the audience learned a fact that unresolved grief and trauma cause extreme harm to a person and their surroundings. In the town of Westview, Wanda imprisoned people there and forced them to live fake happy lives so that she could trick herself into thinking she was also living in a happy family. Not until the end of the story did Wanda realize her mistake and free the people.