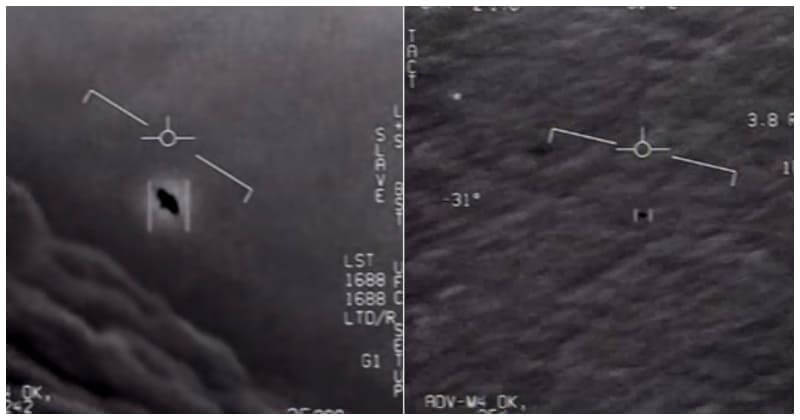 The Pentagon officially released three clips of unidentified flying objects named “FLIR1”, “GIMBAL” and “GOFAST”, respectively, recorded by US Navy military aircraft in 2004 and 2015, showing unusual movements of the UFOs.

The series of videos was confirmed by the US Navy in September 2019 after being leaked online from an unidentified flying object research company called To The Stars from December 2017 to March 2018.

The videos showed what seemed to be UFOs moving quickly while being filmed by infrared cameras. In two out of three videos, there were members of the armed forces showed their surprise observing the rapid speed of the moving objects, with one even considered that could be a drone.

Former Navy pilot David Fravor told CNN: “As I got close to it … it rapidly accelerated to the south, and disappeared in less than two seconds. This was extremely abrupt, like a ping pong ball, bouncing off a wall. It would hit and go the other way.”

According to Pentagon spokesman Sue Gough, these videos are made to refute false rumors about the authenticity of UFOs through many information sources and leaked videos previously caused public confusion.

At the same time, she also said: “After a thorough review, the department has determined that the authorized release of these unclassified videos does not reveal any sensitive capabilities or systems, and does not impinge on any subsequent investigations of military air space incursions by unidentified aerial phenomena.”

Recordings of aviation contacts with unknown objects have been previously analyzed by the Pentagon as part of a now-defunct secret program initiated at the request of former Nevada Senator Harry Reid.

According to the Pentagon, the initiative began in 2007 and concluded in 2012 as the Pentagon determined that there were greater priorities that required funds.

The Mysterious Pyramid Of Cairngorms National Park In Scotland