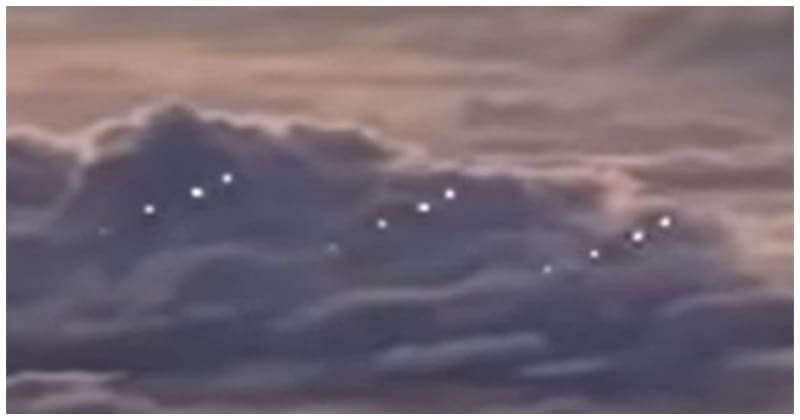 A video taken from an altitude of more than 39,000 feet, that appeared on social media recently, showed 12 unidentified flying objects (UFOs) flying over the South China Sea near Hong Kong and then disappearing into the clouds.

The 53-second video above, was filmed by a US military pilot on November 24 and reported to UFO Stalker, a UFO tracking website, on December 4, according to American Military News on December 9. The video shows 3 sets of 4 mysterious light formations flying above the clouds.

“I don’t know what this is,” one pilot says in the video.

After that, the light spots gradually disappeared in the clouds. The video has garnered more than 40,000 views, and some UFO enthusiasts immediately speculated about the blobs.

A pilot claims he saw a fleet of #UFOs over the Pacific Ocean. The video was shot at around 39,000 feet. 🛸👽

The suspected #alien aircraft took the form of ‘weird’ rotating lights moving across the sky. 😳

What are your thoughts on the footage? 👀🤔 pic.twitter.com/N0I2WS2kYq

#ICYMI Here's the @mufon case 119564 about mysterious lights taken on Nov. 24, 2021 over the South China sea. UFOs? Nope, most likely military flares as we exposed in this thread by @ChrisSPITZER7 (https://t.co/jLwTKNIGBk) and in this video by @MickWest: https://t.co/Kwig7oLgQn pic.twitter.com/qtSlvVj3bq

The discovery of the above UFOs took place a day after the US Department of Defense ordered the establishment of a task force to detect UFOs, called the Airborne Object Identification and Management Synchronization Group (AOIMSG).

The new force will coordinate agencies within the US government “to detect and identify objects in Special Use Airspace (SUA). The team will also assess and mitigate any threats to aviation safety and national security.”