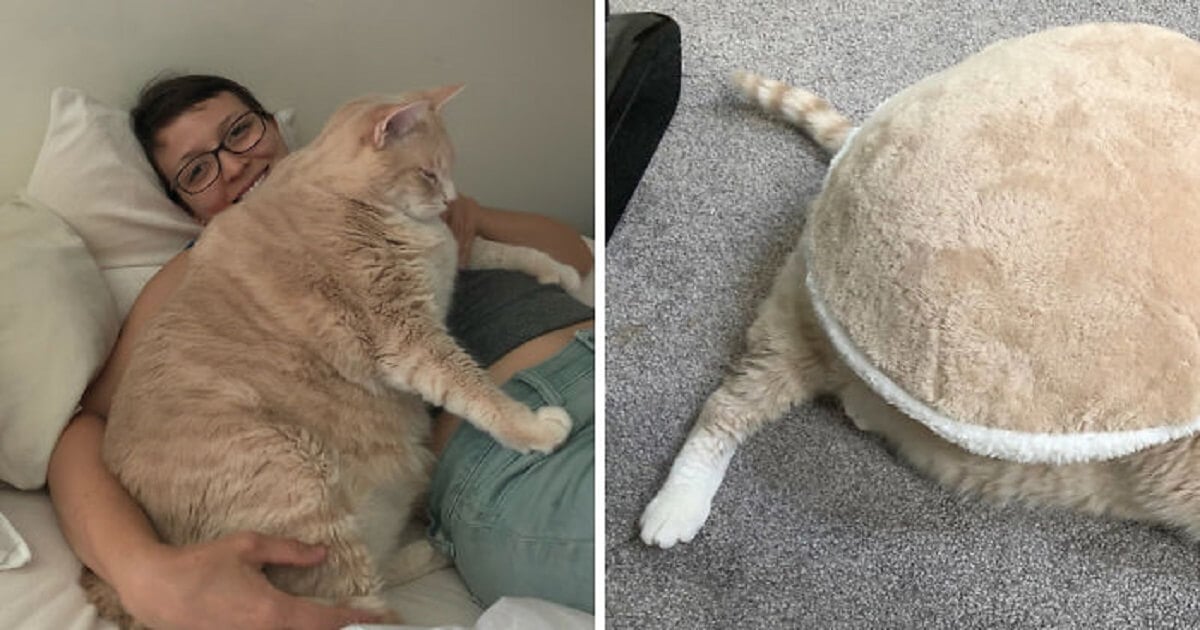 Mike Wilson and his girlfriend Megan Hanneman wanted to find a new kitten. So they decided to go to the local Humane Society. When they walked in, they were instantly drawn to this gentle giant named Bronson. They went in to meet him and instantly fell in love.
A staff member told them about Bronson’s past was that his last owner passed away. Since he was all the way up to 33 pounds and only three years old, they suspected it was an elderly person who may have been feeding him table scraps or something.
After bringing Bronson home, they took him to the vet. The most important thing is to have to loss weight for him, or else he can get Fatty Liver Disease, which can be a fatal illness. They have adjusted Bronson’s diet three times since they got him. They’ve also changed his exercise routine a few times. At first, he was playing with toys with him laying down for about 20 minutes a day and also carrying him downstairs so that he needed to climb back up to get to his favorite napping spot.
Bronson was so affectionate, sweet and was happily kneading his cat bed when first pettinghim. He was the sweetest cat they had ever met and he seemed so happy to be home and have a big space of his own.
Bronson has an Instagram account with over 30000 followers so that people could follow along on his weight loss journey. Many of his followers have been willing to share their tips on feline weight loss and it’s also a place where everyone can share their ideas. The next target goal is for Bronson to lose one pound per month and he’s currently down 1.6 pounds, so he’s well on his way to a healthy life. When they walked in, they were instantly drawn to this gentle giant They bring him home and help him lose the extra pounds He’s currently on 375 calories per day. Half of them are from the kibble and half are from the grain-free wet food His absolute favorite toy is a tomato filled with catnip, which he likes to attack, bite, and kick with his back feet He’s well on his way to a healthy life

He’s not quite ready to join the other cats in testing the furniture up on the wall, but they know he’ll get there in due time Let’s hope he will be soon able to climb these stairs with no problem!

Story Of Man Telling His Child To Beat Up Neighbor’s Cat, Annoying Her And Good Plot Twist

10+ Cats Who Waited All Day For You To Come Home