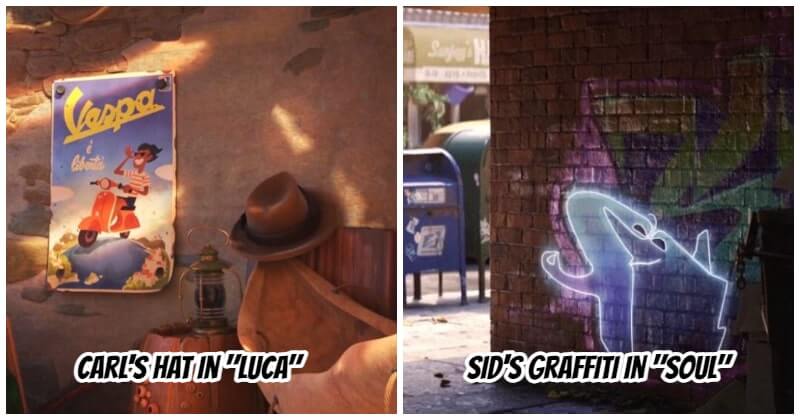 Despite the ever-evolving world of animation, Pixar has always maintained its reputation as one of the most influential studios in the industry. After bursting onto the screen with the legendary movie “Toy Story” in 1995, Pixar has continued to release many movies that attract the audience’s interests and leave a deep impression on them.

Pixar filmmakers always subtly insert many details from their other films or other famous things into its film as a surprise for fans. The effect of these Easter eggs is so good that they even become a hot topic of discussion among moviegoers. Many Pixar fans have expressed their excitement when they noticed them, and they can’t wait to share these discoveries with others!

Do you love these gifts too? Keep scrolling down to discover 10 astonishing Easter eggs in Pixar films we have piled up for you!

#1 Arlo from “The Last Dinosaur” appears in “Inside out” In a fragment of Riley’s memory, we can see the dinosaur Arlo when she and her family traveled on vacation. In “Finding Nemo”, Darla is known as a terror who always makes children cry and fish lovers freak out every time she appears. Although Darla does not directly appear in “Finding Dory”, we can still see a picture of her in the background.

Buy N Large, a massive company in “WALL-E” popped up in “Cars 3” as a sponsor of the racetrack. However, because everything moves quickly on the racetrack, perhaps not too many viewers know about this Easter egg.

Piñatas, a traditional Mexican dish, has appeared many times in “Coco” as a way for Pixar filmmakers to represent this country’s culture. Besides “Coco”, piñatas are also featured in many other Pixar films.

#5 MCU mentioned in “The Incredibles 2”

Municberg Credit Union is the scene of the Underminer’s crime, and the abbreviation for this financial institution immediately reminds fans of Marvel Cinematic Universe. Anton Ego is the harsh food critic in “Ratatouille”. If you pay enough attention, you can see his name appear in Bonnie’s classroom from “Toy Story 4”.

#7 The Dorothea Williams album in “Onward”

In a stack of albums in the background of “Onwards”, there is an album of the Dorothea Williams Quartet. This is also the band that Joe in “Soul” wants to play for. “Soul” shines a light on an Easter egg that deals with Pixar’s “Toy Story” as you can see the graffiti of Sid, the characters from “Toy Story”, on the old wall in “Soul”. Some Pixar fans have expressed their excitement when they noticed that next to Alberto’s makeshift bed, there is a Carl Fredricksen hat in “Up”.

#10 The ‘Turning Red’ reference in Luca In “Luca”, we see a 4 Village logo, which is also the iconic logo used for the band 4 Town. 4 Town is the band that Mei Lee, the main character in “Turning Red” – Pixar’s upcoming release, is crazy for.