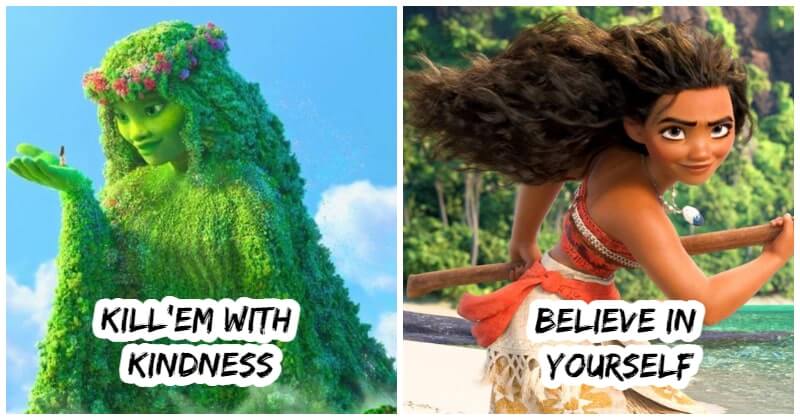 Over the past decade, Disney has changed its mindset and produced movies that portray the power of women. These heroines no longer rely on the princes to help them overcome misery, instead, they fight for themselves and even protect others. And “Moana” is a prominent film that features this new style of the studio.

Moana is a brave, enthusiastic and sincere girl. No matter how many obstacles she encounters, she always has her head held high, keeps pursuing her goal and never gives up. Moana is truly the representative of a true girl boss who knows exactly how to control her own destiny.

Keep scrolling down to discover 6 precious life lessons that make Moana a girl boss, and maybe you can become one too if you follow her ways!

#1 Always believe in yourself

This is the key factor to being a girl boss. As a Polynesian girl, Moana always has freedom and confidence in herself. Even though she sometimes had moments of doubt, Moana ultimately chose to believe in herself and that is what helped her resist anything that stood in her way. Do you remember the scene where a brave little Moana confronts a big and terrifying Te Kā? Instead of fighting, our girl used her kindness and sincerity to awaken Te Fiti from deep inside Te Kā. Be kind to others, and you will get what you expect, that’s the meaningful lesson that the true girl boss Moana teaches us.

#3 Focus on your goal Let’s review the obstacles that Moana encountered on her journey to conquer the oceans, from the stormy seas—Kakamora, Tamatoa’s Lair to Te Ka… Despite these setbacks, Moana never stepped back but persistently pursued her goals. She always keeps her eyes on the prize and that is one of the initial elements that a girl boss must have.

#4 Never let yourself be intimidated easily Moana is a brave girl, and that’s an indisputable fact. When all her villagers are scared of the ocean, Moana still decides to set sail and travel past the reef to restore the heart of Te Fiti. When facing Maui – the giant demi-god who is not friendly at all, Moana still confidently raises her head and says: “I am Moana of Motunui. You will board my boat and restore the heart to Te Fiti”. If Moana isn’t a girl boss, then who is?

#5 Keep trying and trying again until you finally succeed We all know that Moana’s journey to restore the heart of Te Fiti and save her people has not been easy at all. She was caught in a typhoon, hit the rocky seas, and was rejected by Maui – the demi-god she sought for help. However, those obstacles never discouraged Moana, instead, she always stands up and fights for her goals. If you don’t succeed at first, let’s try again! Moana’s parents, even her village, don’t want her to go beyond the reef. Not listening to their advice, Moana still listened to her heart and decided to set sail to help restore Te Fiti’s heart and save her people. There are multiple times in life when you will meet people who say you can’t do something, and all you need to do is prove that they are wrong.