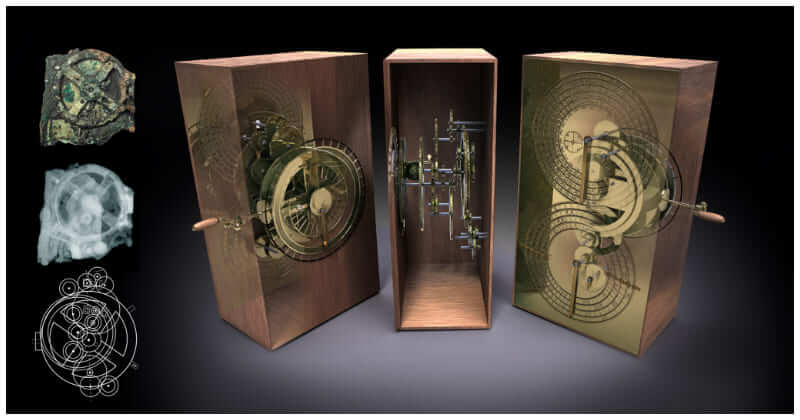 A discovery led by researchers at University College London (UCL) have found the key mechanism that made up the ‘Antikythera’ – an ancient Greek astronomical calculator, which was a hand-powered mechanical device used in forecasting astronomical events Antikythera is believed to be the world’s first computer and the most complex technique that has survived since the ancient world. The 2,000-year-old device was used to predict the positions of the Sun, Moon and planets, as well as lunar and solar eclipses.

Issued in the Scientific Reports journal, the paper by the interdisciplinary UCL Antikythera Research Team discloses how the ancient Greeks predicted the cosmic order (Cosmos) thanks to a sophisticated drive system.

Lead author of the paper, Professor Tony Freeth explains: “Ours is the first model that conforms to all the physical evidence and matches the descriptions in the scientific inscriptions engraved on the Mechanism itself. The Sun, Moon and planets are displayed in an impressive tour de force of ancient Greek brilliance.” A microfocus CT device was used to probe the confidence inside Antikythera. The computer has only one-third of itself left and is no bigger than a shoebox. It is divided into 82 pieces in total, making it difficult for the UCL team to discover.

According to the CT results, the Antikythera computer is made of copper, including 30 gears (remaining) that combine very complicatedly. Thanks to the gears, users can predict astronomical events, including eclipses, moon phases, planet positions and even the Olympic dates. Inside the artifact’s fragments are thousands of hidden characters. Inscriptions on the outer layer described the universe with planets moving in rings and indicated by marker beads.

In addition, on the front of the calculator there are two important numbers: 462 years and 442 years, which accurately represent the cycles of Venus and Saturn, respectively.

” The classic astronomy of the first millennium BC originated in Babylon, but nothing in this astronomy suggested how the ancient Greeks found the highly accurate 462-year cycle for Venus and 442-year cycle for Saturn.” Researcher Aris Dacanalis said. Using an ancient Greek mathematical method described by the philosopher Parmenides, the UCL team figured out how the Greeks discovered the cycles of Venus and Saturn. Moreover, they also believe that the computer can predict the cycles of all the planets in the solar system, although the evidence lied in the lost parts.

“After considerable struggle, we managed to match the evidence in Fragments A and D to a mechanism for Venus, which exactly models its 462-year planetary period relation, with the 63-tooth gear playing a crucial role,” explains researcher David Higgon.

The Antikythera computer has been controversial since it was discovered on a Roman shipwreck in 1901 by Greek divers on the Mediterranean island of Antikythera. The device is kept at the National Archaeological Museum in Athens. The Theopetra Cave And The Oldest Human Construction In The World