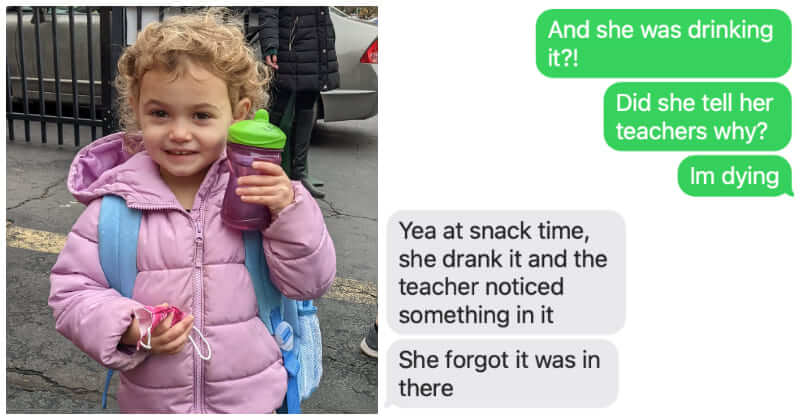 Childhood seems to be one of the funniest and brightest periods in a person’s life. When we were kids, we didn’t carry any burden and just enjoyed life. Sometimes, our innocent souls might lead us to do some crazy yet hilarious things. As we grow older, we wonder why we could do that in such a foolish manner. Anyway, we can’t deny that a child’s pure heart can soften the dark patches, warm, and melt the ice in life. This little girl below will prove it to you.

Like other kids, this 3-year-old girl is playful and naughty. She has a small fish. She adores her pet so much that she doesn’t want to leave it alone at home. One day, she scooped this fish out of the tank, snuck it into her sippy cup, and brought it to school. However, her father caught her red-handed and told this story to his cousin who couldn’t help but share it on Twitter. This tweet soon went viral and has made many people laugh until the tears roll down their faces.

This is Peyton, a little girl who brought her pet fish to school without her parents’ awareness @Connor J Hughes, a Twitter user, decided to publish screenshots of his conversation with his cousin who has a three-year-old daughter You don’t need to worry about this fish, it’s still alive This story has made a lot of people burst out laughing Hilarious Office Memes That Every Office Employee Will Relate To

Having Fun With Hilarious Signs Of This Ice Cream Shop

Classmates Steal This Student’s Work, He Does A Pro Revenge And Half the Class Fails The Midterm