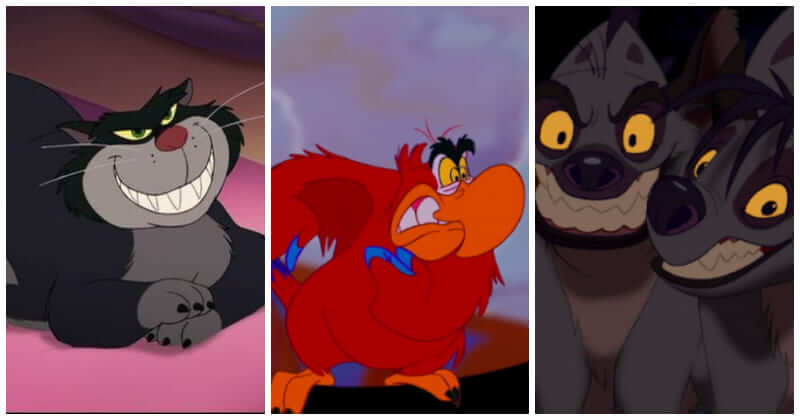 It wouldn’t be a decent film if the protagonists didn’t face off against a villain. The Disney villains are usually clever and cunning, crafting a grand strategy to get what they want. In order to carry out their heinous schemes, villains frequently need the help of a sidekick.

The sidekick is necessary – and, in some cases, literally – the Disney flicks’ ugly stepchildren. These characters almost never have the same level of intelligence as the Disney villain, but they do occasionally display as a genius. They are rarely addressed, and some of us are unable to recall their names. However, just because they aren’t as well-known as our heroes and villains, or have the same importance as the main characters, doesn’t mean they should be overlooked. So, let us take a moment to recognize these hardworking yet underappreciated helpers! Pain and Panic are Hades’ inept henchmen. They’re nearly awkward and silly in appearance but they possessed the power to shapeshift. They also followed Meg around in some of their non-threatening and discrete forms to make sure she was doing what she was supposed to be doing. Scar is assisted by hyenas. They sit at Scar’s right hand, willing to go to any length to see that he is crowned king. Some of the other characters on this list follow the villain out of sheer loyalty, but these individuals do it for the money. If Scar becomes the leader, they will no longer have to go hungry, and who wouldn’t want that? Iago is a well-known Disney sidekick. While Iago is loud and arrogant, he is also skilled and intelligent. Actually, it was Iago who devised the plan for Jafar to gain the throne by marrying Jasmine and then dispatching her and the Sultan. Jafar was enthralled by the concept and sought, but failed, to carry it out. Diablo was Maleficent’s wicked sidekick who was faithful to his master. This raven’s totally loyal to Maleficent and her evil plans. And even though he is just a raven, he always plays a big part in Maleficent’s success.

#5 Flotsam and Jetsam (The Little Mermaid) Flotsam and Jetsam are 2 good assistants of Ursula. She wouldn’t be able to obtain any clients without these two eels. She utilizes them not just to observe merfolk outside of her cave, but also to lure victims to hand over their lives to her.

Cruella De Vil’s wicked aim in 101 Dalmatians was to create a coat made of Dalmatian pups. And in order to achieve her desire, she employs robbers Jasper and Horace to assist her. They are horrible for the fact that no one tries to steal puppies.

#7 LeFou (Beauty and the Beast) Despite the fact that LeFou doesn’t appear to be a prominent character in the film, he is actually rather intelligent. Gaston is the typical “stupid jock,” whereas LeFou is the geeky guy who hangs around for the sake of becoming popular by association. Gaston doesn’t seem to care for his lackey in the least, yet his right-hand guy helps him out several times during the film. If it hadn’t been for him, the public would not have felt Maurice should have been put up in the first place, and the mob might not have had somebody to lead them in the end. Lucifer is a cat, and his favorite pastime is chasing mice. Cinderella has a slew of mouse pals, and Lucifer makes it his mission to attack them all. He understands that if he succeeds, he will please his owner. The kitten doesn’t have the ability to talk or shapeshift like some of the other characters on this list, but that doesn’t stop him from being a useful companion. Kronk is Yzma’s sidekick, but he’s not very bad. He’s not just a great source of humorous relief, but he’s also a nuanced character who fights to find the appropriate balance between good and wrong. Whenever Yzma asks him to do anything awful, he usually takes some time to consider whether or not he should do it. Mr. Smee is one of those characters that we can’t believe is actually terrible. He appears to be primarily concerned with maintaining the peace and controlling Hook’s unpredictable temper. He’s also insanely dedicated to Hook without ever doing anything genuinely evil, which is a tough balance to strike.