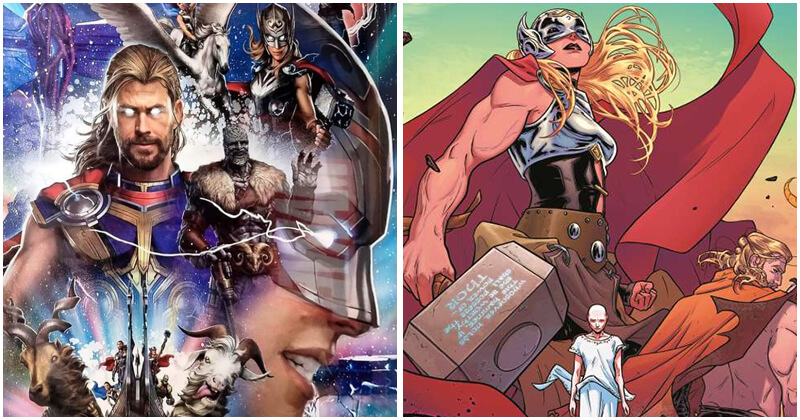 After the first fleeting images of the characters from Thor: Love and Thunder arrived in recent months, it is now possible to take a first look at the new costumes of the protagonists of the film. Officially, of course.

Thanks to the new concept art used for merchandise-creating and promotional purposes, we can now admire the new costume of Thor and the “God of Thunder” version of Jane Foster, who will soon return in this upcoming movie. Not long ago, Andy Park, one of Marvel Studios’ most prestigious concept artists, told ScreenRant that we could expect many things from the highly anticipated film this summer.

“There’s a reason why there’s been over a decade of successful movies and just why this franchise is growing. So Thor: Love and Thunder falls right into that where it’s just pushing the boundaries of what’s comfortable and what should be expected,” he said. “You’ll be surprised and push these characters and the visuals go along with that. I think Taika said it in some interview where he’s just like, he’s surprised that he’s even, he shouldn’t be allowed to make a movie like this. And I get it,” the artist continued. “This movie is crazy wild. It’s so much fun. And I simply cannot wait for everyone to see it. Because it was so much fun to work on and design so many characters and do keyframes for. It’s going to be a good one. It’s going to be fun.”

At this moment, very little is known about the plot of Thor: Love and Thunder, other than it will take place after the events told in Avengers: Endgame and Thor: Ragnarok. However, we are going to learn more in the coming months.

Directed by Taika Waititi, Thor: Love and Thunder features Chris Hemsworth as Thor, Tessa Thompson as Valkyrie, and Natalie Portman will come back as Jane Foster after her last appearance in Thor: The Dark World (2013). Notably, Jane Foster will also take on the role of Thor as what happened in the 2016 comic book The Mighty Thor written by Jason Aaron. The movie’s newcomers include Christian Bale who will make his MCU debut as Gorr the God Butcher – the film’s main villain, and Russell Crowe who will lend his face to Zeus. There will also be many members of Guardians of the Galaxy, including Star-Lord, once again brought to the screen by Chris Pratt, Drax played by Dave Bautista, Nebula played again by Karen Gillan and Mantis played by Pom Klementieff. Last but not least, director Taika Waititi will show up on the big screen himself as Korg the scary rock monster.