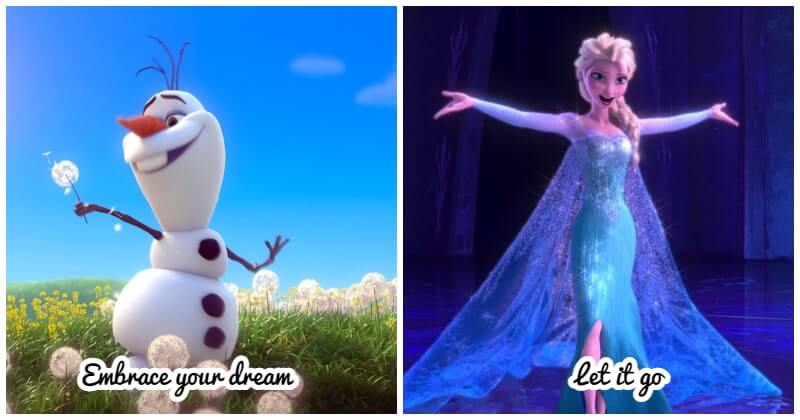 Inspired by Andersen’s fairy tale The Snow Queen, “Frozen” tells the journey of the brave princess Anna and her friends on her journey to find her sister Elsa, who possesses the power to create ice and accidentally plunged the kingdom into eternal winter. With the compelling storyline, the beautiful soundtrack, and the great animation, it’s no surprise that “Frozen” is one of the highest-grossing animated films of all time, and it’s worth mentioning that the movie even collected two Academy Awards trophies for itself.

Through the heartwarming story about the touching relationship between Anna and Elsa, this movie brings a solid handful of excellent life lessons to the table and inspires audiences of all ages. Just go down the page to discover 7 life lessons from “Frozen” we have rounded up for you, they are guaranteed to make you love this masterpiece even more!

#1 The power of love In the movie, we have witnessed many times Elsa and Anna save each other’s life. The strength of these brave actions comes from the love they have for the other. Therefore, it’s not superpowers but love is actually the most powerful magic of them all. At the beginning of the film, Elsa appeared to be a girl with a special superpower, which is also the reason why she decided to separate herself from Anna. However, as the storyline progresses, we realize that the power that sets Elsa apart is also what makes her amazing and powerful. Therefore, don’t be afraid to be different, just be yourself and don’t ever apologize for it. Elsa once said “the past is the past”, and this quote is definitely true. No matter how hard you try, you can’t change whatever you did. Therefore, instead of dwelling on the past, you should let it all go and strive for the future.

#4 Just listen to your heart and follow your dream Olaf always dreams that someday, he can experience summer. But to many people, this dream may be impossible for a snowman like Olaf. However, he has never given up on his passion and in the end, Elsa uses her magic and makes Olaf’s dream come true. Even a snowman can dream of sunshine, so why can’t you embrace your dream, right?

#5 Some people are worth melting for #6 Don’t shut out the people you love When we’re hurt or going through bad things, we tend to close ourselves off and keep others away. However, sometimes those actions can hurt those who love us. Therefore, don’t shut them out, just let them in so that they can help us overcome our pain. Love at first sight is really romantic, but just imagine what would happen if Anna married Hans. Love should be built on friendship and mutual trust, just like what Anna and Kristoff did. Don’t marry a man you just met just because of your loneliness.

Abandoned Kittens Swam Toward Humans To Seek Help On River