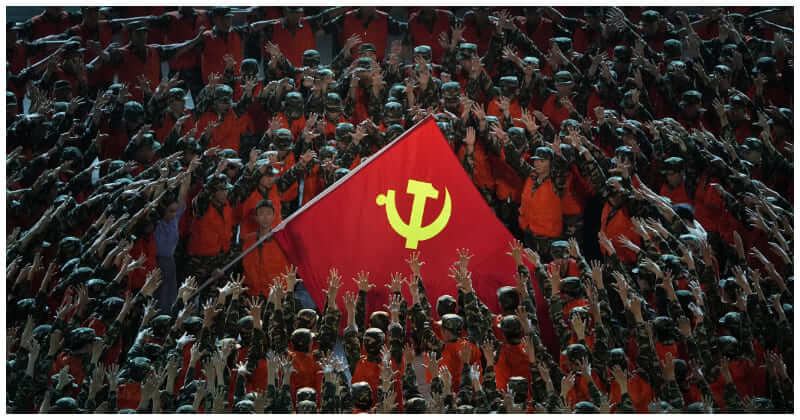 It is no exaggeration to say that 2021 is one of China’s most tumultuous years in the modern era. Last year, the world’s second superpower continuously recorded impressive and sometimes sad milestones in a variety of fields, from politics and society to economy and finance. Hundreds of artists surround the flag of the Communist Party of China during a performance ahead of the party’s 100th anniversary celebrations. Then, at the official ceremony on July 1, President Xi Jinping sent many powerful messages to the world through an hour-long speech. After three years under house arrest in Canada, late at night on September 25, Ms. Cathy Meng Wanzhou – CFO of Huawei Technologies, took the flight to Shenzhen International Airport. In front of a crowd of more than 100 supporters, Ms. Meng waved and made a short speech. At the end, she expressed: “Finally, I’m home.” A large screen outside a mall shows a scene of a meeting between President Joe Biden and President Xi Jinping, November 15. This is the first time the two leaders have spoken in nearly a year after Mr. Biden took over the White House. People in Nanjing city, Jiangsu province get vaccinated against COVID-19, April 9. According to data from Our World in Data, China has so far deployed a total of 2.7 billion doses of vaccines, of which 1.19 billion people have fully received two shots. Rescue teams rescue saving people trapped in a large flood in Henan province, July 23. At least 100,000 people had to be evacuated, many properties were flooded, some large businesses were disrupted and there was a risk of food and goods shortages on a large scale. At the UN General Assembly (UNGA) in New York on September 21, President Xi Jinping announced that Beijing will not build new coal power plants abroad to reduce global greenhouse gas emissions. However, China would still increases domestic coal production to solve the power shortage crisis since the end of August. Workers on a bitcoin mining farm in Dujiangyan in Sichuan province, China. Many years ago, Beijing has expressed displeasure with crypto mining and this year, the campaign to crack down on the crypto market has become more intense. In mid-November, the National Development and Reform Commission (NDRC), China’s top economic planning agency, said it would continue to handle the entire cryptocurrency mining chain and establish a long-term mechanism to prevent the “revival” of cryptocurrency transactions. On August 11, China decided to close a large station at the port of Ningbo-Zhoushan after a male worker at this station was found positive with COVID-19. This is the second time this year that the Beijing government has closed one of the major seaports in the country because of the pandemic. Ningbo-Zhoushan is the world’s third largest port in terms of container capacity, and plays a large role in China’s trade flows. On August 18, at the 10th session of the China Economic and Financial Commission, President Xi Jinping announced that China would officially pursue the policy of “common prosperity”. Over the past year, the common prosperity has become the impetus for Beijing to limit the power of tech giants, to cool housing prices, to encourage philanthropy and to pursue clean energy. This is also forecasted as a policy that can shape the billion-people economy in the next few years. On September 13, people gathered at the headquarters of real estate group Evergrande in Shenzhen to demand that this “debt bomb” pay off their loans and return their financial products. Security must build fences to prevent investors. Currently, Evergrande is the world’s most indebted real estate group with more than $200 billion in debt. The Evergrande scandal exposed weaknesses in China’s financial system and economy.