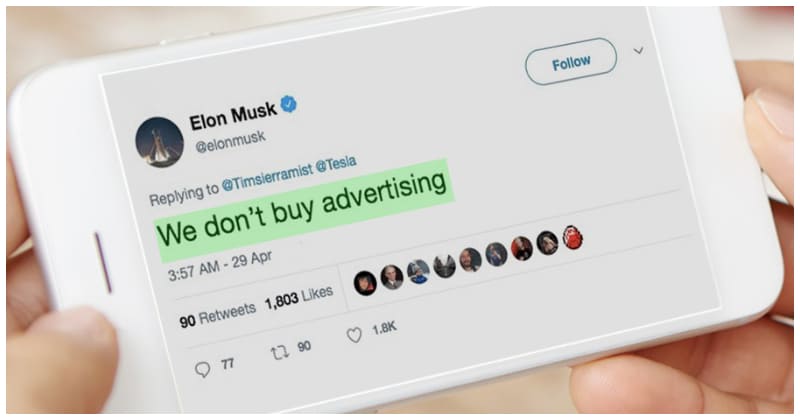 If Tim Cook is a business guru, then Elon Musk is a marketing guru. Musk’s Tesla has never spent a penny on advertising. The world’s richest billionaire also criticizes companies that only spend money on running ads instead of improving their products. We all see carmakers spend a lot of money to market their products. Even the automobiles industry is one of the biggest spenders on advertising in the world. But there is this one strange thing, that is Elon Musk’s Tesla has never spent even a single cent on any form of advertising.

A Tesla shareholder once suggested that the company should spend at least $50 per car to advertise. He stated that advertising helped to increase brand value, brand awareness and consumer interests, that it also helped reduce consumer skepticism and uncertainty about information that competitors may offer.

Musk firmly opposed to this idea and even criticized other companies that only spend money to run ads, instead of improving their products to become better. In the traditional way, companies will spend money on advertising platforms such as TVs, newspapers, radio, billboards, or recently, digital and social platforms.

“Owned” is a way of advertising in which the company can completely control, using what it has to promote products without having to spend money on advertising agencies, which is how Tesla and Elon Musk has been doing.

We’ve heard a lot about the event that Tesla sent the Roadster into space on a SpaceX rocket in 2018. Or, recently, SpaceX partnered with NASA to send humans into space, in which two astronauts reached the rocket launch station in a Model X, observed by everyone following the events.

In fact, no less than 10 times Elon Musk has proven that advertising money is unnecessary for Tesla. Because even the billionaire himself is an extremely effective advertising platform.

Elon Musk’s reputation is well known, he also has a large following of more than 68 million on Twitter. Elon Musk also always does unusual things that greatly attract media attention, attaching images of Tesla or SpaceX products alongside them. SpaceX’s Falcon Heavy rocket made a test launch into the orbit in 2018. Because it needed a large payload to simulate real-life cargo, Musk decided to use his Tesla Roadster.

The event made a big splash, making a lot of people aware of Tesla and Elon Musk’s SpaceX. Until now, that Tesla Roadster might still be floating in space. Maybe 10 years later, people will continue to discuss this special event. Tesla has earned the trust of consumers, not by advertising, but its actions. While the Covid-19 pandemic has been spreading quickly and becoming complicated, causing the number of ventilators used to help save patients to become increasingly scarce, Tesla decided to manufacture ventilators based on its auto components to help combat against the pandemic. Tesla’s most effective advertising campaign that doesn’t cost even a cent is thanks to Wall Street analysts and investors. According to financial reports, Tesla’s market capitalization reached more than $1.01 trillion, equal to GM, Ford and 8 giant carmakers combined. This is a strong affirmation that Tesla is outperforming other competitors in the auto industry. Elon Musk always knows how to attract media attention. From dating the beautiful young singer Grimes, to birthing their son and giving him a very special name, he has caused much ink to be spilled on himself, alongside with capturing great attention from the internet community.

Musk is also very active on Twitter. Everything he posted on his personal page draws a lot of attention from the online community. It can be said that this is an extremely effective advertising channel without spending money of Tesla. Billionaire Elon Musk is the real-life model of the character Tony Stark in the movie Iron Man. Thanks to that, every time an MCU movie starring Iron Man is released, people are reminded of a real-life Iron Man still working hard to change the world.

Elon Musk’s products are the Tesla electric car and the SpaceX reusable rocket that is also widely known, which can change the future. Of course, Elon Musk doesn’t spend a dime promoting that to everyone.

If Tim Cook is a business guru, then CEO Elon Musk can be said to be a marketing guru.

This is the incredible woman who raised 3 billionaires alone

10+ Funny Memes That Every Aquarian Can Relate