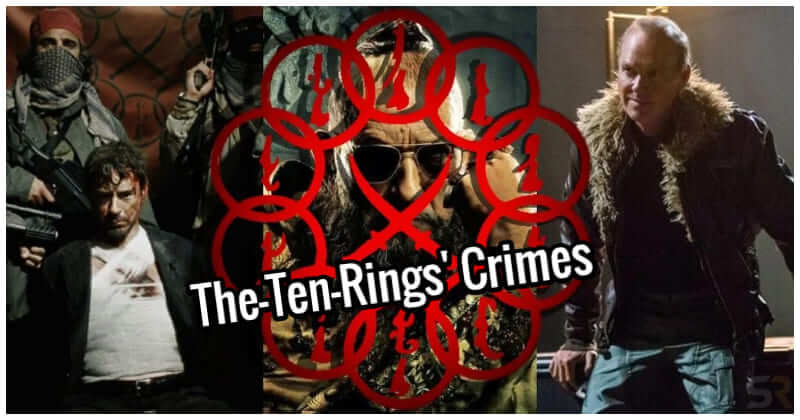 The Ten Rings is the terrorist group slated to reappear in Shang-Chi and the Legend of the Ten Rings and they are powerful, but what influence have they already had on the Marvel Cinematic Universe? The Ten Rings, a mysterious organization of terrorists that want superior technology, has been a recurring menace in the MCU. Members of the Ten Rings speak Arabic, Urdu, Dari, Pashto, Mongolian, Farsi, and even Russian, according to Iron Man. The group’s name refers to Iron Man’s ultimate nemesis, the Mandarin. In the comics, the Mandarin obtained ten magical rings, each containing the spirit of a long-dead great cosmic champion. They bestow incredible power on the Mandarin, with each ring granting a unique skill ranging from mind manipulation to electrical blasts, air vortexes to matter manipulation. The Mandarin, an ancestor of Genghis Khan, is a would-be conqueror seeking global dominance.

Following a ruse in Iron Man 3, Marvel Studios is now introducing the actual Mandarin in Shang-Chi, which is played by Tony Leung. However, the Mandarin’s influence already casts a long shadow over the MCU as a whole. Let’s take a glance at everything the Ten Rings have been responsible for.

#1 The Ten Rings Were Responsible For Creating Iron Man The Ten Rings first appeared in the MCU in 2008’s Iron Man, showing themselves to be a squad of high-tech terrorists who had been spreading havoc in the Middle East for years. For years, Obadiah Stane had been surreptitiously supplying Stark armaments to the Ten Rings, and he had reached a deal with them to assassinate Tony Stark on his behalf. However, a Ten Rings group in Afghanistan kidnapped Stark and tried to force him to create weapons for them. They erred, and Stark created the first Iron Man suit, breaking free and waging a one-man fight against the Ten Rings. Iron Man continues to knock down Ten Rings organizations throughout the world, according to tie-in publications such as Iron Man 2: Agents of SHIELD. In exchange, they backed Whiplash’s quest to exact vengeance on Tony Stark. According to Iron Man 2, a Ten Rings agent offered Whiplash a pass to the Circuit de Monaco, which Stark would be going. As a part of the pit crew, it’s plausible to presume they also organized Whiplash’s cover.

#3 The Ten Rings Obtained Scans Of The War Machine Armor Following the events of Iron Man 2, War Machine found himself engaged in war with Ten Rings cells all over the world. The fundamental operational framework of the Ten Rings was developed in the Iron Man 3 Prelude, probably as a result of Rhodey’s investigation. Terrorists staged a bio-terror strike on Hong Kong, and when War Machine retaliated, they attacked him with hijacked Hammer-tech – a prototype tank fueled by a small nuclear reactor that, if destroyed, had the potential to nuke the whole city. While Rhodey managed to outwit the Ten Rings and flee, they were able to obtain detailed sensor readings of his War Machine armor.

#4 The False Mandarin And Extremis Audiences were expecting Iron Man 3 to finally reveal the Mandarin, but director Shane Black took another method. Aldrich Killian, a ruthless entrepreneur, and industrialist realized the Ten Rings’ possibilities and used rumors about their authority to create the Mandarin, a “boogeyman.” He exploited the Mandarin, as well as his Extremis bio-engineering, to carry out terrorist attacks across the United States. Killian planned to influence the US government by kidnapping the president, but he was defeated by Iron Man and War Machine.

#5 The Mandarin’s Revenge on Trevor Slattery The Mandarin twist irritated comic book aficionados, who anticipated a more authentic portrayal of the renowned antagonist. As a response, Marvel produced a one-shot titled “All Hail the King” as an apology. This revealed that the actor who portrayed the Mandarin, Trevor Slattery, was jailed for his crimes in Seagate Penitentiary. After he had completed a portion of his sentence, the Ten Rings dispatched an abduction squad to take him to the true Mandarin, who was irritated that his reputation had been stolen. Following Iron Man 3, the Ten Rings receded into the MCU’s shadows; maybe the fake Mandarin’s plan had put them on the world’s notice a bit too efficiently, and they intended to keep their heads low for a time. In any event, they were certainly still operating; in 2015’s Ant-Man, the Ten Rings were one of the groups who attempted to buy PymTech from Darren Cross.

#7 The Ten Rings Could Have Been Obtaining Other Advanced Tech The effort to get the Yellowjacket outfit might indicate that the Ten Rings have played a different, more indirect function in the MCU in recent years. The Vulture was shown in Spider-Man: Homecoming to have been selling extraterrestrial and sophisticated technology on the black market for a long time, and it’s plausible that the Ten Rings were one of his customers. Meanwhile, Sonny Burch, a shady businessman, was introduced in Ant-Man 2. When Burch discovered the power of Pym Particles, it didn’t take long for him to find a buyer; the identity of Burch’s customer is unknown, although he might be serving for the Mandarin and the Ten Rings.