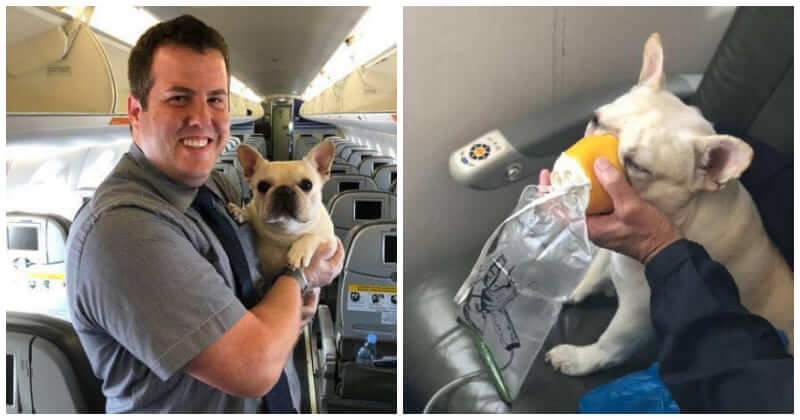 With many horrible things that occur in a decaying world, it’s heart-warming to see people show kindness and sympathy with surrounding people, especially with animals like pets.

A Massachuset couple created a post showing their gratitude for two JetBlue flight attendants who went above and beyond their line of duty to save their dog.

Michele Burt and her husband have been traveling with their dogs for years, and no problem happened. Her flight from Orlando to Worcester on July 5, however, was a different case. Due to the plane protocol, Burt put her dog, three-year-old Darcy, in a pet carrier under her seat. But it was when everything got worse.

The usually obedient Darcy didn’t stay inside the carrier, instead, started to push out her head. It remained a big question to the lady until she decided to check on her and realized something wrong with the dog. Darcy’s tongue and gums were blue, and she was breathing heavily in a panic state.

Scooping Darcy up on her leg, Burt was worried that her dog suffered from respiratory distress. The pup being desperately in need was so obvious that two flight attendants, Renaud Fenster and Diane Asher, decided to leap into action. Airlines are usually very strict about keeping pets under seats. But heroic Renaud and Diane knew that they needed to put Darcy’s life at first. They brought over ice bags hoping to calm the dog down. When they figured out it didn’t work, Fenster suggested using an oxygen mask to help Barcy with her breathing. This, fortunately, turned out to be an effective way. As Burt explained in her post, the pup responded well to the mask. Within a short time “she didn’t want the mask” anymore and continued recovering quickly before the flight ended. Burt, who owed the two helpers, wrote a message of thanks to them:

“I believe Renaud and Diane saved a life, some may reduce the value of the life because Darcy is a canine, I do not.”

She was also thankful for the family sitting behind her who offered help and attention:

“The family seated behind us offered help and baby wipes and the little boy in the seat watched as the Flight Attendants helped an animal in distress, and said as he deplaned “I am glad they helped her get better.”

In the letter, she complimented JetBlue Airlines‘ services and said that she would consider any policy with pets before booking a flight.

“We all are affected by cabin pressure and oxygen fluctuations, human, canine and feline, etc., but the fact that the Attendants were responsive and attentive to the situation may have saved Darcy’s life. Though some may reduce the value of a pet’s life and apply lifesaving efforts to a dog, the attendants applied their skills in a humane and caring way that I like to think represents the best in all of us as human beings.”

“I wanted to say thank you JetBlue and thank you to [Fenster] and [Asher] for doing their job and also being great humans.”

Injured Dog Makes Miraculous Recovery After Being Given To Shelter