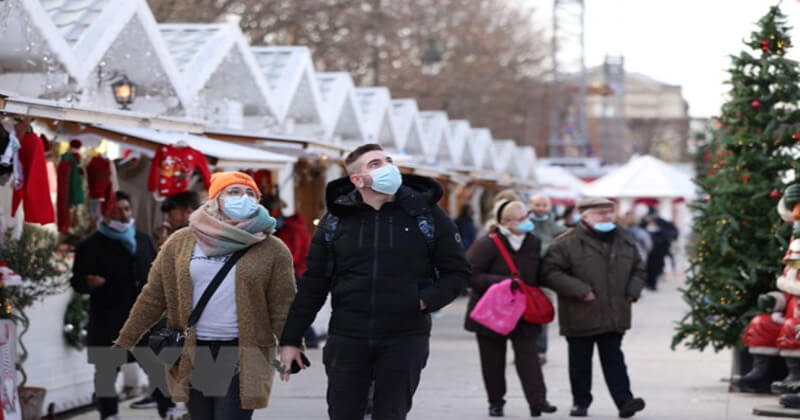 In less than a day, the world will enter a new year. Let’s take a look back at the impressive and emotional moments of 2021 through the series of photos below. The Capitol was engulfed in smoke and riots on January 6. One of the sacred symbols of world democracy suddenly collapsed as the US presidential election was coming to an end. President Trump is said to have incited the crowd of supporters to come to the Capitol to cause chaos. Kenyan man froze on his feet in a giant herd of locusts. Earlier this year, the plague of locusts caused heavy damage to the agriculture industry and the lives of Kenyans. The supply chain, already suffering from a severe shortage of containers and a price shock, took on extra weight when the 221,000-ton Ever Given super ship ran aground and blocked the Suez Canal in March. The Queen of England sat in silence at the funeral of her husband, Prince Phillip in April. Medical staff wait for the cremation of victims who died after affected with COVID-19 at a crematorium in New Delhi, India. According to Our World in Data, India has so far reported a total of more than 34.8 million infections and 481,000 deaths from COVID-19. An employee checks “grinds” at a bitcoin mine in Xinjiang. In the middle of this year, President Xi Jinping’s government has stepped up its crackdown on the cryptocurrency mining industry, forcing many miners to flee their assets and move to new destinations. After a severe flood in July, a town in Altenahr (western Germany) suddenly sank into ruins and ruins. This is a record flood, never been seen in Europe. Firefighters try to fight a forest fire in Strawberry city, California, USA. Due to the influence of global warming, weather incidents such as forest fires, floods, droughts, etc. are becoming more and more serious. Afghans massively applied for aid from the US military after the Taliban took over Kabul in August. Afghans crammed onto an American aid plane at Kabul airport. Western governments are said to have not foreseen that so many Afghans would want to flee. Investors who poured money into Chinese real estate group Evergrande were left stunned after a long day of gathering at Evergrande’s headquarters to claim their money back but were unsuccessful. Later this year, Evergrande fell into the fire when it failed to pay interest on its bonds and was declared insolvent. People watch President Xi Jinping’s speech on “common prosperity” – Beijing’s policy of sharing wealth from the rich to those with lower incomes. Many experts predict the commonwealth policy could shape China’s economy for years to come.