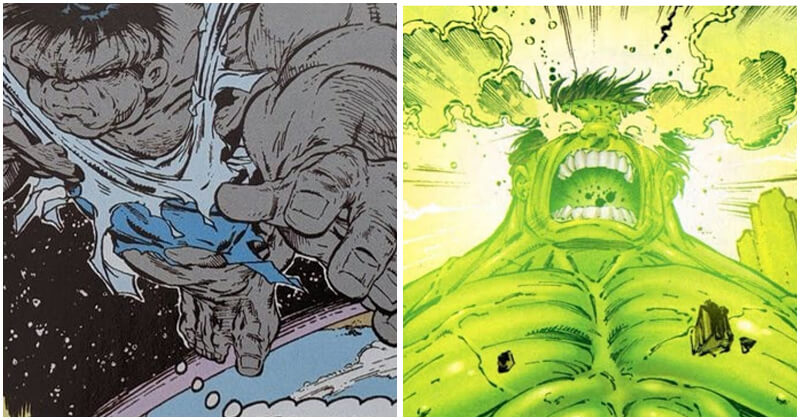 As the strongest Marvel warrior in the comics, the Hulk has gained plenty of love and respect from loyal Marvel fans. When it comes to this incredible combatant, we usually think of his boundless super strength, stamina or durability. However, those are not the only abilities Hulk has. As time flies and the characters change, there are so many factors readers and viewers forget about, including the powers that Hulk hasn’t used much.

Go down the page to discover 8 Hulk’s lesser-known abilities that will surely amaze you, and don’t forget to let us know which one impresses you the most! Hulk is often known as someone with incredible physical strength, so some people may think that Hulk can’t resist telepathic powers. However, the truth is quite the opposite. In fact, Hulk is immune to telepathy. Hulk’s incredible physical strength is distributed throughout his body, so his legs are also super strong. They allow him to run at extremely impressive speeds in case of necessity.

#3 Hulk can absorb and control gamma energy around him Surely there are many people who do not know about this superhuman ability of Hulk, right? This power allows him to store energy for his body and fight against those who aim to use gamma radiation over him.

#4 Hulk has astonishing adaptation to any environment The gamma radiation inside his body gives Hulk several fascinating powers and one of which is the ability to adapt to any environment. As you can see through some scenes in his comic books, Hulk can live at the bottom of the ocean, in the vacuum of space and he can even survive the void between dimensions.

#5 Hulk has healing power and can rebuild his body The Maestro, the most powerful version of Hulk, can rebuild his body molecule by molecule despite being atomized. And there’s one thing you should know, even Wolverine and Deadpool who are known as superheroes with healing factors cannot do this either. Marvel fans first discover this new and strange power of the Hulk thanks to The Devil Hulk. In the comics, after The Devil Hulk was dissected, his individual part was still alive, and later came back together.

#7 Hulk can create a super-breath Even Hulk’s lungs are also unbelievably strong. Hulk’s lung capacity is many times larger than normal humans and it allows him to create super breaths which can blow away any people or objects that attack him.

#8 Hulk has the ability to find his way home This is a gifted ability of the Hulk as he can find his way back to the gamma bomb site that created him no matter what, just like a hound dog. However, this strange ability has not been used much by him anymore.