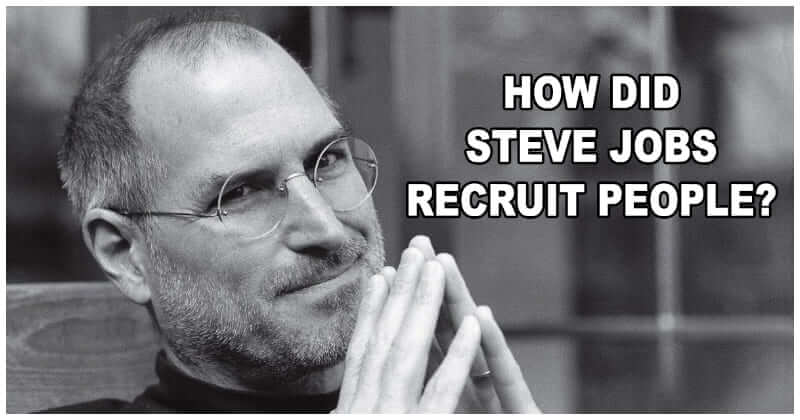 In the book “Leading Apple with Steve Jobs”, Jay Elliot, former vice president of Apple who was recruited by Steve Jobs himself, outlines the method that the company founder used to motivate people, pursue perfection and select a highly creative team. From the early days of Apple, Steve Jobs – the late CEO of Apple, always believed that Apple had to be built into a successful company.

The INC said at that time, Apple invited two “professional” managers to work. But then Jobs immediately fired them.

“It didn’t work at all,” quoted a young Steve Jobs in a video posted on YouTube. “Most of them were bozos,” he continued. They knew how to manage but they “didn’t know how to do anything.”

That video was later archived by Quartz at Work. Though it was the time when Steve Jobs was still young with a familiar black turtleneck, what the Apple founder shared seems to be timeless. After firing those professional managers, Jobs shared that he started looking for talents with a very different standard: Passion.

“We wanted people that were insanely great at what they did, but were not necessarily those seasoned professionals, but who had at the tips of their fingers and in their passion the latest understanding of where technology was and what we could do with that technology and we wanted to bring that to lots of people,” explained the late Apple CEO.

The Apple founder didn’t care about the grandeur of the resume, or where the candidate worked. He just wanted people who solved problems with passion. And to replace those “professional” managers, Jobs gambled on Debi Coleman, a woman working in a field that was the complete opposite of technology.

Moreover, Ms. Coleman, 32, was inherently just an inexperienced person and only had a degree in English Literature. What was the outcome of that recruitment? After working as a manufacturing process manager, Coleman became Apple’s CFO at the age of 35.

It was at this point that Jobs explained that great employees don’t have to be managed by someone. If they have enough passion, intelligence and motivation, they can completely manage themselves. And what they really need to know is the vision of a company.

At this time, the role of management is clearly shown. Instead of teaching employees how to work, the former Apple CEO believes that leaders should focus on the art of connecting by sharing a vision, so that everyone can work towards a single goal.

At the end of the video, employees from Apple’s early days share how they learned to ignite passion during the interview process. Andy Hertzfeld, one of Apple’s first software engineers, said that his team would show interviewees a prototype of the Macintosh. Then we’d see how these people react. If a candidate didn’t show too much emotion, then the Apple team would know that person was unlikely to pass the interview.

“We want their (candidates) eyes to light up and to get really excited,” Mr. Hertzfeld concluded. “Then we knew they were one of us.”

So, if you want to recruit talented, innovative people, belows are the methods Steve Jobs applied:

Identify the necessities without being too rigid

Upon hearing this method, everyone took it for granted. However, recruiters often do not deliberately consider to identify the real requirement. Maybe you don’t know you’re interviewing the perfect fit, or the person assigned to the hiring task isn’t looking for the right one. What’s even worse is choosing the wrong person.

Steve Jobs was always clearly aware of the need. However, he was also not rigid about the qualifications and personalities of the person he was seeking. Sometimes, his choice surprised everyone, when he saw something in a candidate that not everyone can deduce – something that whispered in his ear: “This is the right person for the job.”

Susan Kare was one case recruited this way. She was a high school friend of Andy Hertzfeld. When Steve Jobs visited Xerox’s Palo Alto research center, he was captivated by the “graphical user interface”. This is a mechanism that allows the use of icons on the screen to easily and clearly perform operations. Icons are used this way every time users drag and drop something onto the recycle bin.

Who will continue to develop icons and other elements to create a good-looking and user-friendly design? Andy nominated Susan for this since he thought she would make a great artist. Most recruiters in a similar situation would not agree to interview Susan, noting her disqualification as she knew nothing about technology, thought she might be an artist.

Steve Jobs was completely the opposite as he saw the value in Susan, which was the ability to quickly grasp and and the unique creativity that can contribute to the business of Apple. He considered her talent, passion and agility were much more important than her meager knowledge of technology, thus choosing her as a core member of his Mac team.

Never limit yourself to conventional methods

Steve Jobs accepted a lecturer’s offer at Stanford University and considered it his scheduled job. Students see it as a rare privilege to discuss business issues face-to-face with a start-up entrepreneur, as well as a leader of a new industry in personal computing. Moreover, for Steve Jobs this was a reciprocal job, because he himself felt inspired and energized by his students. And wherever he went, he did look for candidates for his M Mike Murray was one of 20 MBA students in this case. Steve Jobs talked a lot about Apple and how to change the world with personal computers, which intrigued Mike at this time, urging him to be part of Jobs’ team. In contrast, Steve Jobs was also impressed by his student and assigned Mike the position of marketing director.

Another exemplar was Bob Bellville. In the spring of 1981, when Bod turned 21 and was about to graduate from Stanford University, having worked part-time for about eight years at Xerox, Steve Jobs noticed that the student had an insight into how to turn technology to a finished product and how to run a company, much to Jobs’ preference. He saw Bob as a highly intelligent engineer, an independent thinker and expert leader.

From another source about the name Mike Boich, a Stanford bachelor who was about to graduate with a Harvard MBA, Steve Jobs managed to contact and recruit him. It was Mike who faced the most difficult challenges at the time of the Macintosh launch. Called the “missionaries,” the group that Mike assembled had to convince software developers to create programs for the Mac, which they eventually succeeded. Mike’s contributions were so important that without this “missionary” team, the Macintosh would not have existed until now.

H/T: Steve Jobs Made a Brilliant Change When He Returned to Apple. It Changed the Company Forever | Inc.com

15+ Memes That Will Make Every Libra Say “OMG Me”

14 Accurate Scorpio Memes That Speak Out Their Mind

8 Dangerous Smells That You Should Not Ignored In Your Home

These Daily Moments Will Unlock Aries’ Personalities…Watch Them Now!

10+ Memes Only People Who Love Zodiac Signs Will Understand

What Is It Like To Have An Aries Girlfriend? Describing In 15 Amazing Memes

15 Funny Memes That Every Gemini Can Find Relatable