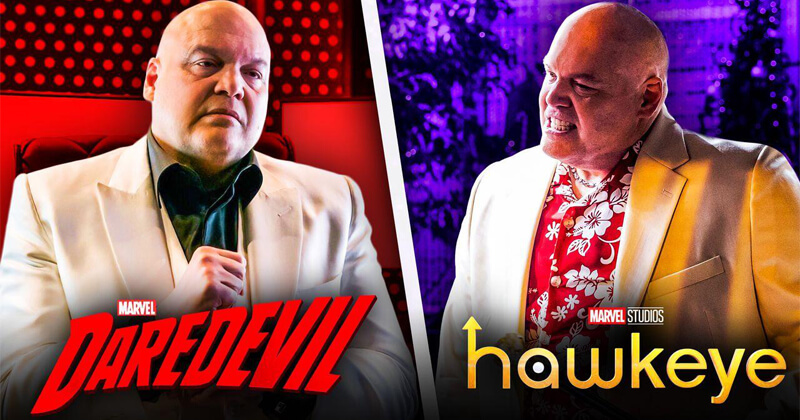 The Kingpin of the MCU has finally debuted in Hawkeye and this time, he is also played by Vincent D’Onofrio – the actor who had already portrayed this character in the three seasons of Daredevil on Netflix. Now, in an interview with Geek Culture, D’Onofrio has revealed an interesting detail about this infamous villain.

“It’s the same Kingpin. He obviously has more physical strength and can take a lot more physical abuse, but from a story point of view it was discussed that this is after the Blip, that he is the same guy that was in Daredevil, but he’s lost some of his power and that my arc in Hawkeye is that I want my power back,” he said. In addition to expressing his point of view on the character, D’Onofrio also talked about how he decided to undertake Wilson Fisk’s transition from the Marvel universe of Netflix to a wider one – the MCU.

“From an actor’s point of view, I’m portraying him exactly with the same kind of emotional feel and foundation that I did in Daredevil,” the Men in Black star shared.

Notably, Hawkeye series directors Bert and Bertie also explained what it took to bring the character to the Marvel series after his involvement in the Netflix show, and how they inserted his story into the MCU. “There was never any kind of requirement or need to meld Daredevil and Hawkeye in any way,” Bertie said, and Bert added that she thought they should just “respect the character, and where the character is in the universe.”

Now, D’Onofrio’s return as the New York crime lord has opened up the possibility for many other actors from different Marvel/Netflix shows to come back to the board audience, especially when Marvell Studios has confirmed that Charlie Cox will soon appear again as Matt Murdock aka Daredevil. Marvell Studios President Kevin Feige himself has shown interest in bringing back Jessica Jones and Luke Cage from Iron Fist as well, but it’s not clear how or where these characters could possibly show up.

The six episodes of Hawkeye‘s first season are all available on Disney+.