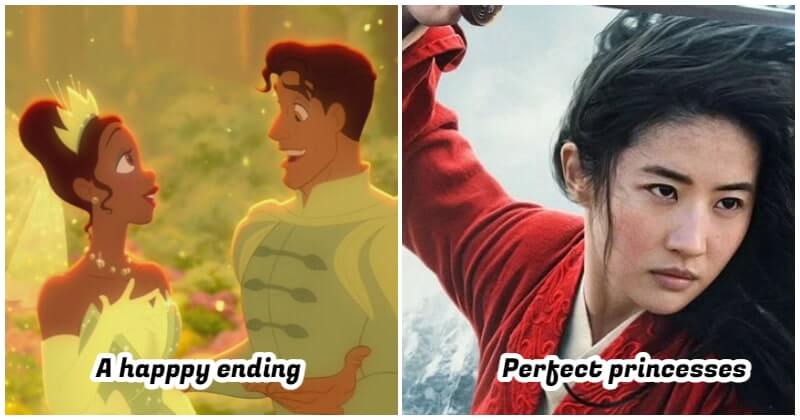 Disney animated films with beautiful princesses and princes are always capable of attracting the interest of audiences of all ages. However, sometimes, to ensure the success of its films, Disney usually decides to play it safe and uses repeated ideas that make the outcomes end up being pretty predictable.

After several decades of making so many movies featuring princesses, it seems that Disney is stuck with common trends. Although these days the studio has tried to innovate its classic storylines to suit the new audiences’ tastes, there are still a lot of clichés that fans are tired of watching and wish not to see them again in future films, such as the gorgeous appearances and perfect personalities of Disney princesses, or the love at first sight.

Go down the page to discover the 10 typical clichés Disney always uses in its movies and don’t forget to share your opinion with us!

#1 There’ll always be a happy ending. After overcoming many difficulties and challenges, the main characters will usually get what they want and live happily ever after.

#2 The princesses always have gorgeous appearances. Disney princesses are always beautiful with big round eyes, smooth skin, and a perfect body. They all can make us fall in love at first sight, however, sometimes, Disney fans wish to see some princesses that are relatable to them.

#3 Most of the princesses are really young. Disney princesses often begin their journey to conquer happiness at a very young age, mostly in their teens. Disney’s youngest princess is Snow White (14 years old). There are only a few exceptions, such as Elsa, Anna and Pocahontas who were in their 20s.

#4 Disney princess needs to be helped. Disney princesses, no matter how strong they are, still need to be rescued at least once. The rescuer is often their love interest and this scene is usually a way to progress the relationship between the two main characters. Perhaps because some princesses knew little about the world, they are often overly naive and trust anyone who treats them well (albeit only in a fake way). And that’s exactly why these girls often encounter unnecessary troubles and pitfalls.

#6 An adorable sidekick with little purpose. Did you notice that most princesses have a best friend as a small animal? And while the sidekicks of Mulan, Cinderella or Snow White are important to the movie, the other princesses’ pets often don’t contribute much to the storyline. For instance, Moana’s pet pig only appears in a few scenes and is quickly forgotten. This is definitely one of the most predictable clichés of Disney ever. Disney princesses are usually smart, beautiful, kind, and tolerant even to those who treat them badly. However, building perfect characters also has a drawback, it gives the characters no more opportunity to grow.

#8 The pain of losing a loved one. Disney movies, though more or less, all have a little bit of tragedy. And it’s very common for Disney fans to see their princesses suffer from the pain of separating from their parents (Rapunzel from “Tangled”) or watching their beloved ones passing away (Moana from “Moana”). Although this motif has now been gradually restricted to match the audience’s interest, Disney princesses still often fall in love with their prince very quickly. After all, there’s still a reason why these films are called fairy tale romances!

#10 Princesses aren’t satisfied with their lives. Despite being born in gorgeous castles and living a rich life, some princesses still complain about their lives. They don’t like the responsibilities that come with their role and think that they keep them from achieving their dreams. The two princesses that represent this cliché are Ariel from “The Little Mermaid” and Elsa from “Frozen”.