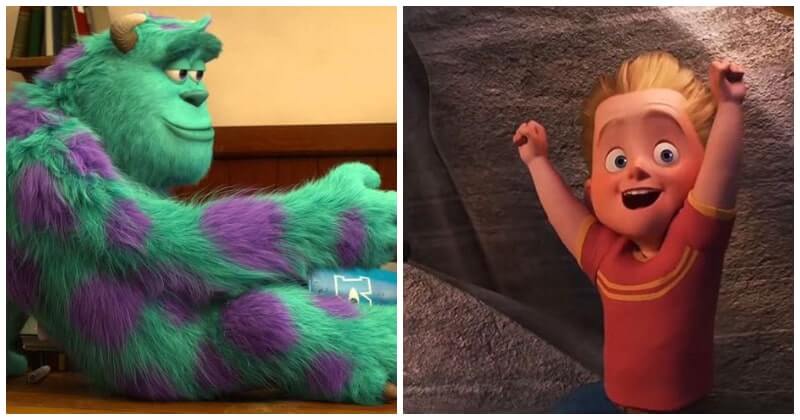 Movies often teach us that if we are determined and put in enough effort, we can achieve what we want. We are not saying this idea is wrong, however, life is not always that simple. Sometimes, despite trying our best, we still have to give in to people with natural talent.

Pixar has realized this fact of life and teaches us relatable life lessons. There are several scenes in Pixar’s movies that show us that sometimes, innate power is the main factor deciding who will win the race.

Go down the page to discover this fascinating topic, and don’t forget to let us know your opinion in the comment section below! After asking the witch to grant him the strength of ten men, Mor’du was given something to transform into a bear. With this animal’s natural wild strength, Mor’du became invincible and could almost defeat anyone who stood in his way. As the son of two superheroes, Jack-Jack has several special supernatural powers such as piercing walls, shooting lasers or spitting flames… There is a scene when Jack-Jack saw a raccoon in the yard, he decided to fight against it to protect his house. Facing Jack-Jack’s incredible power, the raccoon, despite being a powerful wild animal, had no choice but to run away. The Roar Omega Roar fraternity is an assembly of many fearsome monsters of Monsters University. While Mike Wazowski tried his best but couldn’t get into this fraternity, Sulley, thanks to his scary roar, was welcomed with open arms. Mater is perhaps the prime case that proves that natural talent and luck are better than hard work. He is not a professional spy, however, Mater has a natural gift for recognizing various car parts, along with his gadgets and sheer luck. Therefore, even without spending too much effort, Mater still easily discovered the true identities of the villains.

#5 Dash from “The Incredibles” Did you remember the race that Dash participated in towards the end of the film? Thanks to his innate speed, Dash didn’t put into too much effort but still comfortably sped his way to second place.

#6 The jellyfish from “Finding Nemo” The jellyfish has natural defenses that can keep most animals away from them. When Dory and Marlin faced this swarm of jellyfish, despite her best efforts, she was unable to resist the natural talent of the jellyfish and was severely injured by them. Kevin is a special bird that has never been discovered in history. After Charles, the villain of the movie, returned from Paradise Falls, South America with the skeleton of a giant bird and was considered a liar by scientists, he dedicated the rest of his life to capturing Kevin. However, with her wisdom and her incredible speed, Kevin successfully outwitted Charles for years. In the racing world, high technology and speed are everything. Jackson Storm is a car that has all of the above two elements and it gives him the right to be arrogant. Thanks to his natural talent, Storm easily beat Lightning McQueen although McQueen had been a professional racer for a long time. And after McQueen’s training throughout the movie, we still don’t know if he can ever defeat Storm. Woody was a toy with a passionate love for its owner – Andy. He had done everything to be the toys’ leader and to remain as Andy’s most favorite toy. However, when Buzz Lightyear, a new toy with excellent looks and great features appeared, Andy was infatuated with him forgot about Woody.

#10 The grasshoppers from “A Bug’s Life”